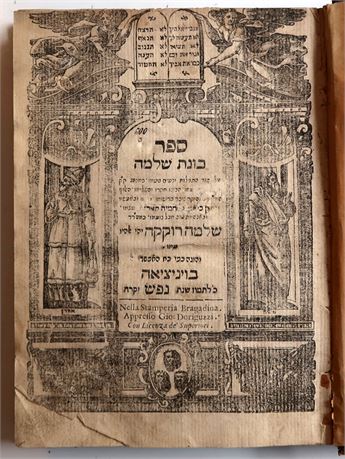 Esoteric explanation of prayers by R. Solomon Rocca, an Italian kabbalist. The title page of Kavvanat Shelomo describes it as being on

the mystical meanings of prayer, the pleasantness of its reasons, according to the Italian rites of his
community ....

The title page is followed by verse in praise of Kavvanat Shelomo by R. Moses Zacuto, beginning “From old esteemed and great, King Solomon, 'with understanding and wisdom' (cf. Exodus 35:31) acquired a name for himself, sing now sages ... "; an approbation signed by four Venetian rabbis in which they note Rocca's expenditures to publish this work for the public good, forbidding its republication without Rocca's consent for ten years; and an apologia from Rocca, in which he expresses his gratitude to Zacuto. In his introduction Rocca writes that Kavvanat Shelomo is based on the teachings of R. Moses Cordovero, R. Menahem Azariah da Fano, and R. Isaac Luria (ha-Ari). In addressing his intent Rocca writes, what is it to us to eat fatty meat at a golden table (cf. Ta'anit z 25a) without head or mouth, for who will eat and who will be satisfied from "the bread of angels" (Psalms 78:2S)? Deep mysteries, the meaning of prayers, particularly shaharit (morning prayers), the most pleasing of prayers, a cord of benevolence being drawn from above to below. There are copies in which this order varies, Zacutos verse appearing after Rocca’s introduction.

The text is in two columns, the liturgy in unvocalized square letters and Rocca's commentary, generally lengthy, in rabbinic type. An example is the explanation at the beginning of Kavvanat Shelomo, where Rocca writes one must wash his hands in the morning to remove the king's daughter, that is, the kelipot (spiritual impurities) of the night from his hands, and after three times should make the benediction on netilat yadayim. Rocca explains that one should have in mind that in this benediction are thirteen words alluding to the thirteen middot of mercy alluded to in the Tikkunei de- Yinuka of Abraham Avinu. One should have in mind to draw upon himself from the abundance of the category of kindness to that of Abraham, who established shaharit.

Despite having written verse in praise of the book, Zacuto, in his correspondence, expresses considerable criticism of the work, accusing Rocca of confusing different kabbalistic schools in Kavvanat Shelomo, it not being permitted to harmonize and unify variant kabbalistic systems. Rocca has been accused of being a crypto-Shabbatean, and Shabbatean allusions have been found in Kavvanat Shelomo. Benayahu observes that the approbation for the book was a copyright only and does not address the contents. This is the only edition of Kavvanat Shelomo, Rocca's only published work.