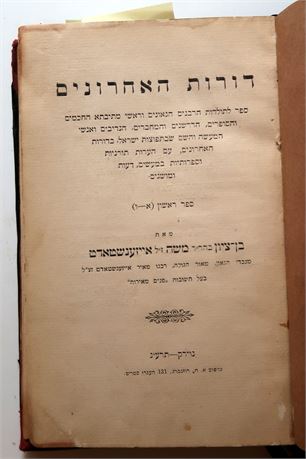 R. Benzion ben Moshe Eisenstadt. R. Eisenstadt was born in Kletzk, Belorussia on March 13, 1873. After studying at the local yeshiva under the guidance of R. Yoseph Nachman Feder, R. Eisenstadt traveled to Nishvitz to continue his Talmud study under the esteemed R. Yoseph Grodzinski. At Nishvitz, R. Eisenstadt became close to R. Joshua Rabinowitz, the communal Rabbi, whom he helped with the publication of a commentary on Maimonides. Moving to Derezhin and later to Karelitz, R. Eisenstadt began what would become a long and successful career as an author of homiletics and Jewish story, in particular biographies of eminent rabbinic figures.

IN 1903, R. Eisenstadt immigrated to America. Settlilng in Brooklyn, where he remained for the duration of his life, R. Eisenstadt earned his livelihood as a pulpit rabbi while continuing to write articles on matters of Jewish laww, rabbinic commentary and biographies of rabbis. In 1903, R. Eisenstadt became the spiritual leader of a small group of former Kletzk residents, but a few years later he came the pulpit rabbi of a larger Brooklyn congregation, Tiferet Zion.He subsequently moved to another congregation, Kol Israel, where he remained for a few years until he accepted an appointment to become the rabbi at Chevra Tehillim Kiever Homler Congregation in Brooklyn.

An ardent supporter of Zionism, R. Eisenstadt was a member of Mizrachi and worked for the benefit of several charities in Palestine.

In order to devote his efforts to research and writing, R. Eisenstadt retired early from the rabbinate in 1936. For the next 15 year, he distinguished himself as a prolific scholar whose interests focused largely on life stories of former and contemporary rabbis. His Chachmei Yisrael b'America remains a useful source for rabbinic biographies. In addition, R. Eisenstadt contributed articles to several journals in matters of homiletics and Talmud commentary.