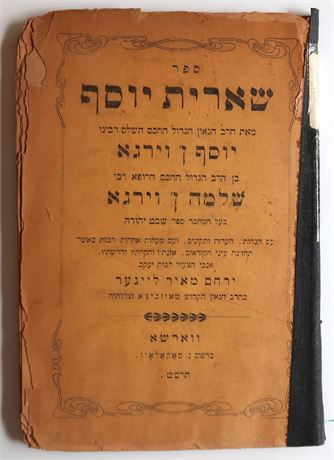 With the commentary and schoraly notes of R. Yeruhem Meir b. Yaakov Leiner, (1875-1933) Admor of Ishbitza-Radzhin. An orphan at age three, he was raised by his llustrious brother R. Gershon Hanokh Henach Leiner, the third Admor of Radzhin. R. Leiner was an erudite scholar and published many works in all aspects of Torah scholarship.

On talmudic principles by R. Joseph ibn Verga (d.c. 1559), Turkish scholar. After escaping to Lisbon with his father, R. Solomon ibn Verga during the expulsion of the Jews from Spain, Ibn Verga emigrated to Turkey. Settling first in Constantinople, he later moved to Adrianople, where he was rabbi and dayyan. In about 1550 he published here his father's Shevet Yehudah, together with supplementary material. Ibn Verga translated some of the supplementary material from Latin but some of it he heard from Moses Hamon and from Abraham ibn Arama (otherwise unknown). In addition, he described the persecution of the Jews in Christian countries, and reproduced Isaac Abrabanel's account of the expulsion of the Jews from Castile, at the beginning of his commentary on the book of Kings. He also incorporated accounts of blood libels in Cairo and Amasia (Turkey), and a valuable 13th-century chronicle which he found in the library of Yom Tov Sanzolo.