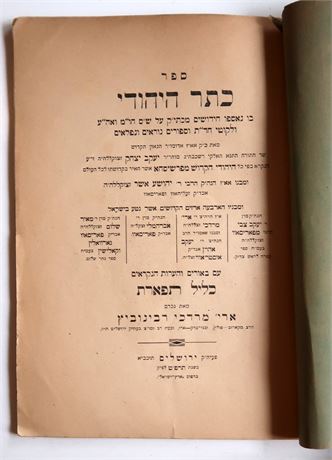 A rich and varied collection of novellae, discourses, likkutei ha-da’at. and wondrous seforim by the gaon R. Jacob Isaac, known as ha-Yehudi ha-Kadosh (the holy Jew) of Pshiskha from manuscripts on the Talmud, Hoshen Mishpat and Orah Hayyim by R. Aryeh Mordecai Rabinowitz. Also included are writing of his son R. Judsah Asher and his four sons, fall our cedars planted in Israel. They are accompanied by notes and a commentary entitled Klil Tiferet. There are approbations and an introduction preceding the text. An important and treasure addition to the writings of ha-Yehudi ha-Kadosh of Pshiskha.

R. Jacob Isaac ben Asher of  Pshiskha (Pryzysucha, c. 1766–1814) was a ḥasidic rebbe, the founder of Pshiskha Ḥasidism, in Poland. R. Jacob Isaac was born in Przedborz, Poland, to a rabbinic family. In his youth he was a student of R. David Tevele b. Nathan of Lissa and R. Aryeh Leib Halperin, whom he followed to Apta. He started teaching in the local yeshivah, after which he wandered in poverty, teaching children. It was in Apta that he joined Ḥasidism after becoming acquainted with R. Moses Leib of Sasov and R. David of Lelov . The latter became a life-long friend and their children married. It was R. David of Lelov who influenced him to travel to see to R. R. Jacob Isaac Horowitz – "Ha-Ḥozeh" (the Seer) of Lublin – in what would be a decisive event in both of their lives. The Ḥozeh recognized him as his great disciple, and Ha-Yehudi ha-Kadosh accepted the Ḥozeh as his rebbe. It was probably then that he began to be called Ha-Yehudi ha-Kadosh, so that he would not be called by his rebbe's name. The mutual admiration continued throughout their lives, nevertheless their relationship was tangled and complex. Ha-Yehudi ha-Kadosh arrived in Lublin at a relatively young age but as a fully developed personality. The Ḥozeh asked him to become a mentor to the young elite students that arrived in Lublin. Soon brilliant youngsters along with older Ḥasidim were looking to him to guide them in their religious life. The very presence of a new charismatic teacher in the Ḥozeh's inner circle attracted hostility from some of the older disciples who were overshadowed by him, and from the Ḥozeh's family. A major cause of the opposition was his original religious teaching and leadership, which was in conflict with the Ḥozeh's. Under the influence of his surroundings the Ḥozeh's dealings with him vacillated between intimacy and bitter hostility and even persecution. The schism was inevitable. Ha-Yehudi ha-Kadosh moved to Przysucha to become a rebbe and to found his own school. Some of the most distinguished Ḥasidim of Lublin joined him, among them R. Simḥah Bunem of Przysucha and R. Menahem Mendel of Kotsk . Ha-Yehudi ha-Kadosh died in Przysucha as he was in the midst of his ecstatic daily prayers. After his death, R. Simhah Bunem of Przysucha was recognized by most of his disciples as his successor.