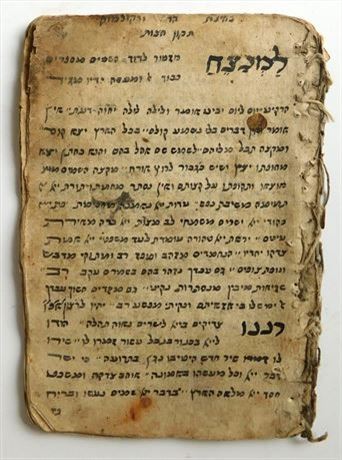 Tikkun Hazot prayers are recited at midnight in memory of the destruction of the Temple and for the restoration to the Land of Israel. This custom developed from the rabbinic description of G-d mourning the destruction. It is recorded that during the night He "sits and roars like a lion, exclaiming: `Woe to the children, on account of whose sins I destroyed My house and burnt My temple and exiled them among the nations of the world'" (Ber. 3a). The hour of midnight was chosen because David arose at this hour to study and pray, as it is said, "At midnight I will rise to give thanks unto Thee" (Ps. 119:62; Ber. 3b–4a).

This practice became formalized under the influence of the Kabbalah during the period of R. Isaac Luria (Ari z'l). Two separate forms of the service developed known as Tikkun Rahel and Tikkun Le'ah. Tikkun Rahel, consisting of Psalms 137 and 79 and Tehinnot on the destruction of the Temple, is recited on days when Tahanun is said. On the Sabbath, festivals, and days when Tahanun is omitted, Tikkun Le'ah, consisting of more joyful psalms, such as 111 and 126, and selections from the Mishnah (Tamid ch. 1), is recited.

The breath and scope of this work reflects that for hundreds of years the Yemenite Jewish communities followed their traditional ways of secular and religious life, not being influenced by external trends and currents. Some customs in the Yemenite prayer rites go back to the prayer book of R. Saadiah Ga'on. From the 16th century on the Kabbalah and especially later its Lurianic school and system found its way to Yemen and influenced Jewish literary production in the areas of commentaries to the Bible, prayers, and liturgic poetry. All of this rich history is reflected in this work.