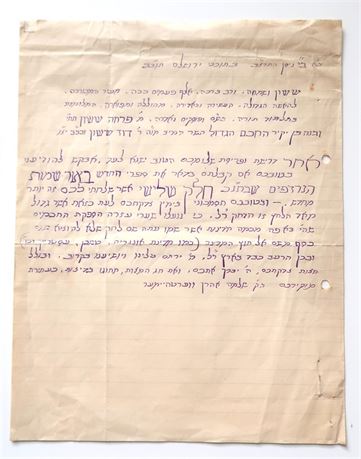 Letter by R. Solomon Aaron Wertheimer (1866–1935), rabbinical scholar and bibliophile. Wertheimer, born near Pressburg (Bratislava), Slovakia, grew up in Jerusalem. He became interested in the many rare books he found in Sephardi yeshivot and, despite penury, began to collect Hebrew books and manuscripts, particularly Oriental ones, including some unique specimens. Wertheimer was one of the first to publish some of the Cairo Genizah treasures. His Midrash collections, containing some hitherto unknown works, are Battei Midrashot (4 parts, 1893–97), Leket Midrashim (1903), and Oẓar Midrashim (2 parts, 1913–14). A revised and enlarged two-volume edition of these collections appeared during 1948–53, edited by his grandson A.J. Wertheimer. Wertheimer also published geonic and medieval responsa: Kohelet Shelomo (1899), Ginzei Yerushalayim (3 parts, 1892–97), Zikkaron la-Rishonim (1909), and Ge'on la-Ge'onim (1925). Among his original works are Darkah shel Torah (1891), on the methodology of halakhah and aggadah; She'elot Shelomo (2 parts, 1932–33), responsa; Be'ur Shemot Nirdafim sheba-Tanakh (1924; 1953), a work on biblical synonyms. The revised edition of the last by his sons includes a biography and a bibliography of his published books and numerous manuscripts, among them commentaries on Bible and Mishnah, a siddur, a Passover Haggadah, and a supercommentary on Naḥmanides' Bible commentary. Wertheimer also contributed to learned periodicals and was active as a preacher.