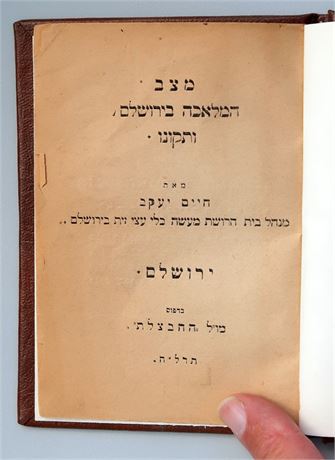 Progress report of an olive wood factory in Jerusalem by the administrator Haim Jacob. He includes a two page diatribe against the recipients of Sir Moses Montefiore's monies, accusing them of waste and deceit.

Final 2 pp. are unrecorded in bibliography. They contain a statement of gratitude to Kaiser Franz Joseph I for his generous donation in rebuilding the olive wood factory after a disastrous fire consumed it. Kaiser Franz Joseph I (1830-1916, Emperor from 1848 until 1916), son of the Austrian Archduke Franz Karl and the Bavarian Princess Sophie became Austro-Hungarian Emperor in 1848 after the abdication of his uncle Emperor Ferdinand I. In 1854 Franz Joseph married Duchess Elisabeth in Bavaria (also Princess of Bavaria through her mother's side of the family), who became Elisabeth of Austria ("Sisi" or "Sissi"). Their only son, Crown Prince Rudolf, committed suicide in 1889 in the famous Mayerling episode with his young mistress Baroness Marie Vetsera. Rudolf's killing of the Baroness Vetsera was an extremely grim chapter in the long line of outbreaks of mental instability in the Hapsburg Dynasty caused by their long history of inbreeding. <p>Franz Joseph took firm moral stands. When Pope Pius IX detained the six year old Jewish boy Edgardo Mortara on account of the claim that a housekeeper had secretly baptized him, Emperor Franz Joseph sent the Pope a plea to return the child to his parents. The Pope refused his request. During his long reign he won popularity among all strata of Jewry in his empire and abroad. Anti-Semites nicknamed him "Judenkaiser." The Jewish masses referred to him as h"rych (ha-keisar, yarum hodo: "the emperor, may his Majesty be exalted"), and many folklorist tales were told of him, among them that the prophet Elijah had promised him a long life. The synagogues were always full for the services held on his birthday, which were also attended by gentile dignitaries. Franz Joseph appreciated the role of the Jews as a sector of the population both devoted to and dependent on the monarchy at a time of growing internal national tensions. On the question of Jewish emancipation he assented to the liberal attitude of the 1848 Revolution. In 1849 he granted the long-withheld recognition to the Vienna community simply by addressing its delegation as its representative (A. F. Pribram (ed.), Urkunden und Akten..., 2 (1918), 549). Francis Joseph signed the decree canceling restrictions on Jewish occupations and ownership of real estate (1860), and the Fundamental Law, which made Jews full citizens of the state (1867). In 1869 he met Jewish representatives in Jerusalem and gave a contribution to enable completion of the Nisan Bak Synagogue (Tiferet Yisrael). When visiting synagogues and other Jewish institutions he would assure Jews of his favor and praise their virtues, such as their devotion to family life and charity. He several times expressed his dislike of anti-Semitism, and in the Lower Austrian Diet called attacks on Jewish physicians a "scandal and disgrace in the eyes of the world" (1892). He twice refused to confirm the anti-Semite Karl Lueger as mayor of Vienna, and on the day he finally did so conferred an order on Moritz Guedemann, the chief rabbi of Vienna. He ennobled 20 Jews during his reign. After World War I many Jews of the former Hapsburg dominions looked back nostalgically to the reign of Franz Joseph as a golden age.