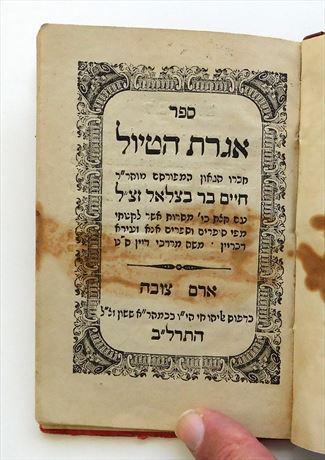 Popular alphabetic explication of biblical, Talmudic, and midrashic passages by R. Hayyim ben Bezalel (c. 1520–1588). R. Hayyim, brother of the Maharal of Prague, was a student of R. Shalom Shakhna, together with R. Moses Isserles (Rema), and learned at the yeshiva of R. Solomon Luria (Maharshal). At the time that R. Hayyim wrote Iggeret ha-Tiyyul he was rabbi of Friedberg.

There is an introduction from R. Moses Mordecai Dayyan, [Sephardi Tahor] followed by R. Hayyim’s introduction; he informs that his teacher for Bible, particularly Torah and Rashi in depth, was R. Isaac ha-Sephardi, upon whose knee he learned; his words were pearls, pleasant sayings that captivated and made an impression upon Hayyim’s heart and were honey in his mouth. Those who heard Hayyim repeat these words urged Hayyim to record them so that they not be forgotten. However, time and responsibility for his yeshiva did not permit Hayyim to do so, until the winter of 1569. At that time the “flock was gathered” (cf. Genesis 29:8) together “for anger has come out from the Lord and the plague began” (Numbers 17:11) in Frankfort and Friedberg. As a result, learning in the yeshiva ceased. Hayyim, deeply troubled by those who perished, was unable to penetrate the depths of halakhah and Tosafot. Nevertheless, he could not sit idle without Torah, even for one day, for Torah is a shield against Divine wrath and a refuge from the Angel of Death. Hayyim determined to write this work with the words he heard from his teacher. It is entitled Iggeret ha-Tiyyul, for in it one can journey (ya-tiyyul) and find delight from troubles and burdens. It is divided into four parts; peshat, remez, derash, and sod (pardes, literal, allusive, discursive, and esoteric interpretations of Torah), as it says, “four entered the orchard” (cf. Hagigah 14b). All who read it will stroll (tiyyul) in the orchard of pomegranates and pick the lilies. The text, in a single column in rabbinic type, is, as noted above, divided into four separate parts of pardes and the entries in each part are arranged alphabetically. Among R. Hayyim’s other works is the popular ethical Sefer ha-Hayyim.