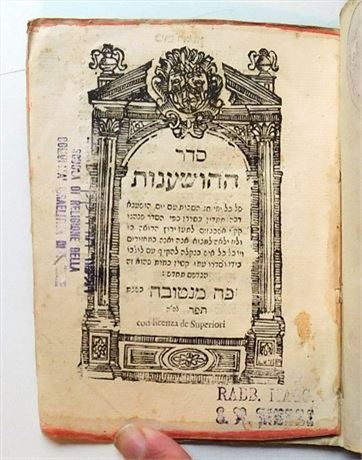 [12] ff., octavo, 162:115 mm., light age and use staining. A very good copy bound in the original paper over boards.
The title describes the purpose of this publication: ...so that one may have easy access to the prayers without the need to search for them in the Mahzor or elsewhere in the synagogue...

The text of the Hoshanot prayers according to the custom of Ashkenazim for the entire Sukkot holiday. Hoshanot are poetical prayers, thus named because of the recurrent expression "Hoshana" (or "Hoshi'a Na," "Save, I Pray!"). Hoshanot are recited on every day of Sukkot, usually after the Shaharit or Musaf prayers. Each day while they are said a circuit is made of the synagogue (on the seventh day, seven circuits). The origin of the prayers and the procession lies in the Temple ritual: "Every day [of Sukkot] one circles the altar once and says, 'Pray! O L-rd, save, I pray! Pray! O L-rd, give success, I pray!'; (Suk. 4:5). The first references to this practice in the synagogue come from the period of the geonim. ,p> Already in ancient times, the words hosha na were linked into one word hoshana. The word served as a response, or a call, after every rhyme or section of prayers which were composed in later generations for this purpose. Of these prayers (usually written in alphabetical order), many are undefined in content (e.g., "For the sake of Thy truth, for the sake of Thy covenant"); others are supplications for water or for a blessing for the produce (e.g., "Save, I pray! the land from being cursed, the animal from losing its offspring"); while still others are concerned with salvation from exile and with redemption.

In all prayer books, from those of R. Amram Gaon and R. Saadiah Gaon to those of the present day, there are hoshanot on various subjects and in different forms. It can be assumed that several of the hoshanot, which are signed with the name "Eleazar," were written by R. Eleazar Kallir. There is insufficient evidence, however, to determine the authorship of other hoshanot. Some were also written for the Sabbath of Sukkot, and include topics pertaining to the Sabbath. But on that day there is no procession. In some rites hoshanot are not recited on the Sabbath of Sukkot at all. The hoshanot of the seventh day, Hoshana Rabba, are of a special character. Seven processions take place; in some rites the hoshanot of all the previous days are repeated while others recite hoshanot written specially for this day. Under the influence of the Kabbalah, piyyutim dealing with the seven guests (Ushpizin) have been supplemented to the hoshanot of this day. Indeed, the seven processions allude to them.