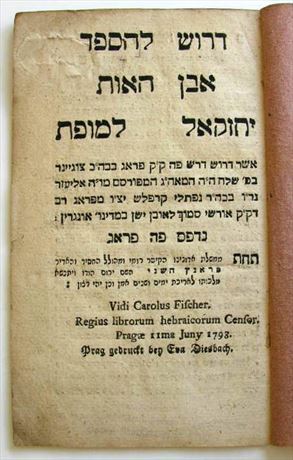 Eulogy for R. Ezekiel b. Judah Landau (1713–1793), halakhic authority of the 18th century, known as the Noda bi-Yhudah, after one of his works. Landau was born in Opatow, Poland, and received his talmudic education in Vladimir-Volinski and Brody. He was endowed with qualities which make him one of the most famous rabbis of the close of the classical Ashkenazi rabbinic era. He came from a wealthy and distinguished family tracing its descent back to Rashi. He had a commanding appearance and rare intellectual ability, was of strong character imbued with a love of truth and of his fellow men, and had considerable diplomatic skill. By nature he was an intellectual ascetic whose main interest lay in the study and teaching of Torah. In his time he was regarded as the prototype of the ideal Jew. At the age of 21 he was already dayyan of Brody, and at 30 rabbi of Yampol. From there he received a call in 1754 to become rabbi of Prague and the whole of Bohemia, one of the highest positions of that time. His tenure of the Prague rabbinate enabled R. Landau to give practical effect to his outstanding qualities. It afforded ample scope for his rabbinic and communal activity both in Prague itself and beyond. He acted as judge, teacher, and mentor of the community. In his capacity as rabbi of Bohemia, he represented the Jews before the Austrian government. In his great yeshivah, he taught hundreds of students, the cream of Jewish youth from Austria and surrounding countries.