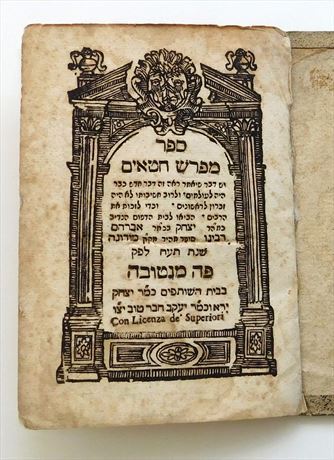 Repentance  liturgies excerpted from the work Brit Avraham (Lublin 1577) by R. Abraham b. Shabbetai Sheftel Horowitz (c. 1550–1615), one of the most eminent talmudists of his day in Poland, a pupil of R. Moses Isserles. R. Horowitz resided in Cracow and Lvov, and in 1595 was elected a dayyan for the province of Lvov. R. Horowitz, who was a keen student of Maimonides in his youth, took issue in a forcible polemical tract with R. Aaron, av bet din of Poznan, who wished to restrict Jewish instruction to the Talmud alone. R. Horowitz also argued for the teaching of secular subjects because of their general importance. Indicative of R. Horowitz' aristocratic attitude, in both the spiritual and social sense, is his view that beliefs and ideas cannot be explained to "the simple folk living in ignorance... [who] have no need of knowledge, not apprehending what it is," and that it is unnecessary to instruct them other than to enjoin them against committing "common offenses such as fraud, false oaths, calumny and slander." His rationalistic approach is reflected in the first version of his commentary to Maimonides' Shemoneh Perakim (1577). When he grew older, however, R. Horowitz increasingly turned to mysticism and practical ethics. In this spirit he wrote a second version of the commentary (1602) in which the emphasis on rationalistic principles is reduced, and he states that this is "the principal [version], supersed ing the earlier one." To serve as an ethical guide he wrote Berit Avraham (Cracow, 1602?) which sets out practical examples of the transgressions enumerated in the Viddui. His book Emek Berakhah (ibid., 1597) is mainly a halakhic exposition of the benedictions for enjoyments, prayers and prayer ritual. In his ethical will, Yesh Nohalin (Amsterdam, 1701), R. Horowitz formulates his conception of the spiritual and social attributes of the ideal Jewish leader in Poland: he should combine religious reverence and respect for the individual, honor for the family and its status, and responsibility in his economic and communal obligations with the duty to submit to the disciplinary requirements of the leadership. The book became highly popular as an ethical guide. His son was R. Isaiah Horowitz (the Shelah).