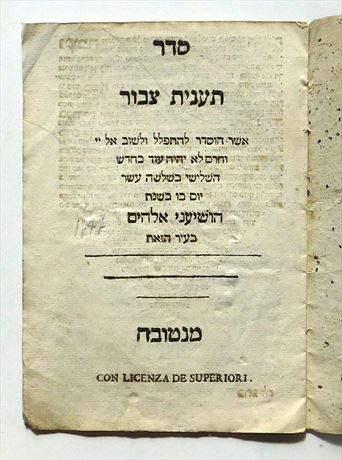 Liturgies to be recited on the fast day of 13 Sivan in rememberence of a fatal earthquake in Mantua the prior year, 1776, that destroyed and leveled many homes leaving many victims.

An elegy on a tragedy is described in Kinat Sofdim (Mantua 1776), by R. Jacob R. Jacob Raphael ben Simhah Judah Saraval. This ḳinah is on the death of sixty-five Jews who perished together in an accident. This was the greatest disaster in Mantuan Jewish history. On May 31 of that year, three weddings were scheduled to be celebrated in the ghetto. The gathering was uncommonly large as two of the brides were not local girls, but were from Sabbionetta and Ferrara. Guests cakme to the home of Graziadio (Hananel) Joseph Finzi, crowding into the rickety third floor. The floor collapsed, bringing the lower two storys down with it.  Thirty seven men and twenty-eight women, among them one of the brides, sixty-five in all were killed. Thirty-seven others were seriously injured. Celebration became mourning and instead of merry-making weeping was heard in the ghetto. A public fast and prayers were ordained. There is an introduction from the author and then elegy.

R. Jacob Raphael ben Simhah Judah Saraval served as rabbi in Venice; born about 1708; died at Venice April, 1782. He published an answer to a treatise by the lawyer Benedetti of Ferrara on the religion and the oath of the Jews. Shortly before his death he was preparing a treatise on the etymology of the names of the "terafim." A letter by him on the Masorah appears in Kennicott's "Dissertatio Generalis" (Brunswick, 1783). His "Dissertazione sull' Ecclesiaste" was contained in Joseph Almanzi's library, now in the British Museum.