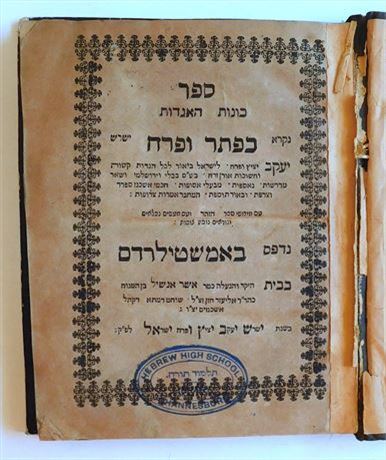 On the aggadah in the Babylonian and Jerusalem Talmuds and Midrashim by R. Jacob ben Isaac Luzzatto of Safed (16th century). The title Kaftor va-Ferah refers to the “bulbs and flower” (Exodus 25:33 and 37:19) in the menorah in the Tabernacle. The title page gives the full title as Sefer Kavvanot ha-Aggadot called Kaftor va-Ferah, for “‘[In days to come] Jacob shall take root (Yashresh Ya’akov); [Israel shall] blossom and bud, [and fill the face of the world with fruit]’ (Isaiah 27:6). To Israel is the explanation of all the difficult and obscure aggadot. . . .” There is an approbation from R. Judah Leib and R. Solomon ben Jacob Ayallon followed by the introduction. In addition to its explanation of the Talmud and Midrashim there are also novellae on Zohar. The book is made up of ma’amarim by subject, and with each ma’amar the text is further divided by tractate in the order of the Talmud. Luzzatto explains many of the aggadah in an allegorical manner, but according to traditional sources, such as Rashi, Ba=alei Tosafot, R. Solomon Adret (Rashba), and R. Nissim, thus defending the aggadah against the attacks of censors, who found in them anti-Christian meanings. The work encompasses cites parallel passages in the Babylonian and Jerusalem Talmuds, Midrashim and the Zohar. The text is in square letters, the commentary in rabbinic type.

R. Luzzatto was reputedly born in Safed but later resided in Basle, Posen and Cracow. He worked as a corrector in Cracow, where he wrote a preface and index to Solomon Molcho’s Sefer ha Mefo=ar (1570) and to Elijah Vidas’ Toze’ot Hayyim (c. 1600), and for the Basle press of Ambrosius Froben, having accompanied Israel Zifroni to that city from Venice to work on the Basle Talmud (1578-81), some of his glosses appearing with that edition. Luzzatto also edited and wrote a rhymed preface to Menahem Recanati’s Ta’amei ha-Mitzvot (Basle, 1581).