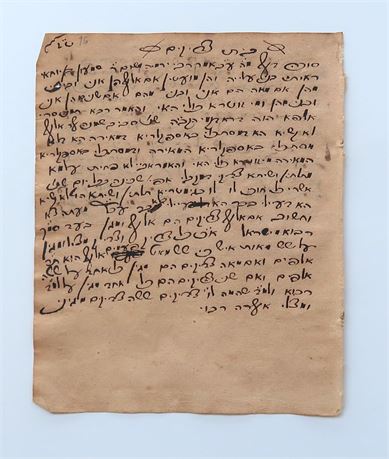 Novellae by R. David Oppenheim (1664–1736), chief rabbi of Prague; bibliophile. R. Oppenheim was born in Worms, where his father, R. Abraham, was a communal leader. Samuel Oppenheim, financier and war contractor to Habsburg Emperor Leopold I, was his uncle. R. David Oppenheim’s teachers included, among others, Gershon (Ulif) Ashkenazi and Ya‘akov Sack (father of Tsevi Ashenazi, the Ḥakham Tsevi). In 1681 he married Gnendl, daughter of the court Jew Leffmann Behrens (Lipmann Cohen) of Hanover.

From 1689 to 1702, R. Oppenheim served in Nikolsburg (Mikulov) as landesrabbiner, or chief rabbi, of Moravia, a post previously held by such prominent figures as Yehudah Leib ben Betsal’el (Maharal of Prague) and Yom Tov Lipmann Heller. In 1701, R. Oppenheim was also named Nasi Erets Yisra’el and later rabbi of Jerusalem, no doubt in recognition of his financial support, and linking him to the Jewish population of the Land of Israel.

R. Oppenheim subsequently moved from Nikolsburg to Prague, where he took up the post of chief rabbi in 1702. His wife died in 1712, and he subsequently married Shifra, daughter of R. Binyamin Wolf Spira-Wedeles and widow of Yitsḥak Bondy, the leader of one of Jewish Prague’s political factions. With this marriage, he expanded his already substantial familial connections with the most influential circles of Prague Jewry. From 1713 on, he shared the duties of landesrabbiner of Bohemia, whose rabbinate was separate from that of Prague, with Spira; after Spira’s death in 1715, he held that position alone.

R. Oppenheim’s most significant legacy to posterity is his vast collection of Hebrew and Yiddish printed works and manuscripts, kept from 1703 at the home of his father-in-law in Hanover because of a justified fear of possible confiscation or destruction of Hebrew books in Prague. He acquired these books and manuscripts as gifts and by purchasing them directly from authors and owners—often heirs of deceased bibliophiles—throughout Europe, at commercial fairs, and possibly through dealers. He prepared and, on at least one occasion, even published lists of desiderata. Today this collection constitutes a significant portion of the Judaica collection of Oxford University’s Bodleian Library.

A wide range of works interested R. Oppenheim, from classical rabbinic texts to local ephemera. Hundreds of titles—particularly Yiddish compositions, including songs, “historical songs,” plays, stories, and legends—are known to us only through unica in his collection, indispensable to contemporary scholars’ understanding of seventeenth- and early eighteenth-century Yiddish literature. By the time of R. Oppenheim’s death, his library contained approximately 7,000 printed works and 1,000 manuscripts. It has formed the basis of the most significant bibliographies of Hebrew literature, including Moritz Steinschneider’s Catalogus librorum hebraeorum in Bibliotheca Bodleiana (1852–1882). Steinschneider also published a separate bibliography of printed Yiddish books, pamphlets, and small ephemera, based on Oppenheim’s collection, in the journal Serapeum (Leipzig) in the years 1848–1849 (reprinted in 1961 as Jüdisch-Deutsche Literatur by the Yiddish Department of the Hebrew University in Jerusalem).

R. Oppenheim wrote several rabbinic tracts, including Mo‘ed David on the Talmudic tractates Shabat and Betsah (1698); responsa, including the posthumously published volumes Nish’al David (1972–1982); and Seliḥot (1713). Most of his writings remain in manuscript; these include homiletic and theological works, additional Talmudic commentaries, correspondence, and catalogs of his library. He also wrote introductions to Gershon Ashkenazi’s Sefer ‘avodat ha-Gershuni and Tif’eret ha-Gershuni and numerous approbations to rabbinic works. He supported the publication of other scholars’ works and published a few of the manuscripts he collected, such as the Torah commentary by Shemu’el ben Me’ir (Rashbam, grandson of Rashi), to which he wrote an introduction. In 1720, students in R. Oppenheim’s yeshiva published a purim-shpil in Yiddish whose title page states that the work was performed publicly that year.

R. Oppenheim’s family life, beginning with his first marriage, exemplifies the close interactions between rabbinic families and those of court Jews. His son, Joseph, married Telze, daughter of Samson Wertheimer, who was Samuel Oppenheim’s nephew and his close associate in many court-related business affairs. His daughter Sarah married Ḥayim Yonah Te’omim-Fränkel (d. 1727), scion of a prominent rabbinic family and himself rabbi of Breslau. Sarah wrote a copy of Megilat Ester with her own hand; her father ruled in a rabbinic responsum that a megillah written by a woman was indeed fit for ritual use. R. Oppenheim’s daughter Blumele married Aaron Ber Oppenheim of Frankfurt am Main; his daughter Jente married Phoebus, son of Seligman Cohen of Hanover; and his daughter Telze married Ber Cleve Gomperz.

To what extent R. Oppenheim himself engaged in the financial activities with which these families are so closely identified, alongside his rabbinic career, is an open question in the scholarly literature. Some claim that he devoted his time to business and to the enrichment of his own personal library at the expense of his rabbinic duties. These claims found their way into much subsequent writing about R. Oppenheim, but they have also been rejected by other scholars. Much documentary evidence regarding R. Oppenheim’s life and activities remains untapped, and a full biography has yet to be written.