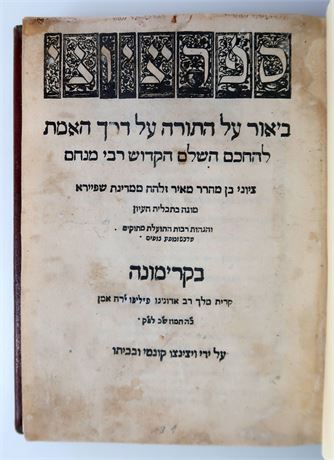 A kabbalistic commentary on the Torah. R. Menahem ben Meir Ziyyoni (late 14th-early 15th century) reputedly served as rabbi in Cologne, Germany, his name appearing as one of the signatories on a document dated 1382.

The Ziyyoni is based on the Zohar, Sefer ha-Bahir, the commentary of Nachmanides (Ramban), and the Keter Shem Tov of R. Abraham of Cologne, as well as including Ziyyoni's own novellae. Ziyyoni is representative of the Hasidei Ashkenaz, with numerous references to the writings of R. Eliezer ben Judah of Worm's Sodei Razayya. It is unusual for a work of this time and place in that it also relies heavily on the Sephardic kabbalistic tradition. An interesting first in the book is the mention of Norway, not previously noted in a Hebrew work.

The civil authorities had permitted Conti to operate a Hebrew press, and even initially resisted the Dominicans' efforts to curtail its operations. Their efforts were futile, however, and, in 1559, Spanish soldiers, led by the apostate Dominican, Sixtus of Siena, made a house-to-house search of Jewish homes looking for prohibited books. They broke into the Conti press; among the works seized were 1,000 copies of the Ziyyoni. This was done  despite the fact that the book was "edited with great care by Vittorio Eliano, grandson of the great grammarian Elijah Bahur Ashkenazi," an apostate and member of a Dominican commission to review Hebrew books, and that it was completed with the imprimatur of the Dominican Inquisitor, Alberius, Vicar of Cremona.  With the accession of Cardinal Giovanni Angelo de Medici of Milan as Pope Pius IV-Paul IV died in August, 1559-the reprinting of the Ziyyoni was permitted, a year after it had been burned. In contrast to Lehem Yehuda, a small number of copies of the first printing of Ziyyoni survived the fire.

This replacement edition of Ziyyoni is set in square letters, unlike the original, which is set in rabbinic (Rashi) letters. The change in fonts is attributable to the destruction of some of Conti's type in 1559 and his subsequent transfer of part of his remaining typographical equipment elsewhere. Text omitted in both editions, apparently not mandated by the censor, may have been due to the editor exercising caution. Indeed, in some instances the second edition is the more complete of the two.

Ziyyoni also wrote a kabbalistic work on the powers of evil and demonology, entitled Zefunei Ziyyoni, which is partly preserved in manuscript.