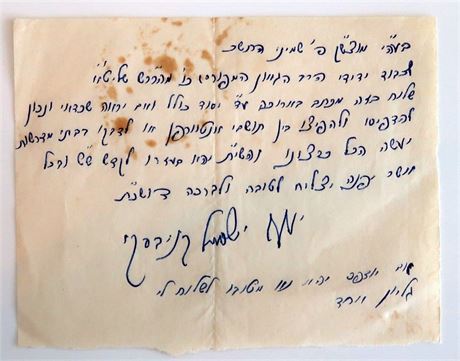 Letter by R. Jacob Israel Kanievsky ("the Steipler"; 1899–1985), was born in Hornistopol from which his appelation, "the Steipler," was derived. From an early age he studied at the yeshivah of Gomel, which was directed by the "elder of Novogrudok," R. Joseph Yozel Hurvitz. Steipler soon became known as the illui ("genius") from Stopol. At the end of his teens he was pressed into service in the Russian army.

In 1925 his first book, Sha'arei Tevunah, was published. After the Hazon Ish, R. Avraham Yeshayahu Karelitz, read the work, he offered his sister Miriam in marriage to R. Kanievsky and the two were married. Immigrating to Palestine in 1934 - about a year and a half after his Brother-in-law had settled in Bene-Berak - Steipler was appointed the head of Bet Yosef-Novohardok yeshivah in Bene-Berak. R. Karelitz was once asked was there any man in his generation for whom one could recite the blessing "blessed is He for having shared His wisdom with His reverers," and the reply of the Hazon Ish was, "the Steipler."

Steipler was the author of nearly 30 books and devoted much time to writing, teaching, and dealing with the vast public which constantly streamed to his home seeking spiritual guidance. Religious and non-religious alike sought his counsel, and Jews from many communities looked to him for guidance. Some 200,000 people from all over Israel attended his funeral.