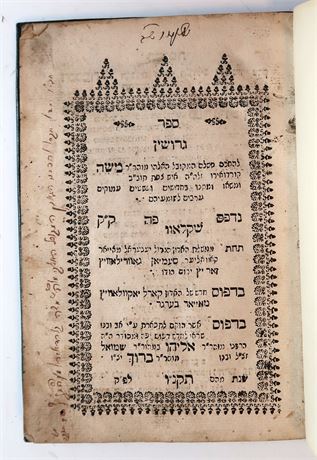 Kabbalah by R. Moses b. Jacob Cordovero (Ramak, 1522–1570), the outstanding kabbalist in Safed before R. Isaac Luria. His birthplace is unknown, but his name testifies to the family's Spanish origins. He was a disciple of R. Joseph Caro and of R. Solomon Alkabez, and a teacher of R. Isaac Luria. His first large systematic work is Pardes Rimmonim, which R. Cordovero completed by the age of 27. Ten years later he finished his second systematic book, the Elimah Rabbati, and also wrote a lengthy commentary on all the parts of the Zohar which has been preserved in manuscript in Modena.  <p>The doctrine of R. Cordovero is a summary and a development of the different trends in Kabbalah up to his time, and his whole work is a major attempt to synthesize and to construct a speculative kabbalistic system. This is done especially in his theology, which is based on the Zohar, and in particular on Tikkunei Zohar and Ra'aya Meheimna. Since R. Cordovero considered these texts to be by one and the same author, he felt constrained to harmonize their different and at times even opposing conceptions. R. Cordovero follows Tikkunei Zohar in his conception of G-d as a transcendent being: G-d is the First Cause, a Necessary Being, essentially different from any other being. In this concept of G-d, R. Cordovero is obviously drawing upon the sources of medieval philosophy (especially Maimonides). In accordance with the philosophers, R. Cordovero maintains that no positive attribute can apply to the transcendent G-d. In his opinion, the philosophers had attained an important achievement in purifying the concept of G-d of its anthropomorphisms. Yet, R. Cordovero stresses that the essential difference between Kabbalah and philosophy lies in the solution of the problem of the bridge between G-d and the world. This bridging is made possible by the structure of the Sefirot ("Emanations") which emanate from G-d. <p>In addition to his two principal systematic books, Pardes Rimmonim (Cracow, 1592) and Elimah Rabbati (Lvov, 1881), the following parts of his commentary to the Zohar were published separately: the introduction to the commentary on the Idras in the Zohar, Shi'ur Komah (Warsaw, 1883); and an introduction to the Zohar "Song of Songs," Derishot be-Inyanei Malakhim (Jerusalem, 1945). Publication of the complete commentary has been begun in Jerusalem. Two volumes of the commentary had appeared by 1968. Other published works are: Or Ne'erav (Venice, 1587); Tefillah le-Moshe (Przemysl, 1892); Zivhei Shelamim (Lublin, 1613), Perush Seder Avodat Yom ha-Kippurim (Venice, 1587); Tomer Devorah (Venice, 1589; tr. L. Jacobs, Palmtree of Deborah, 1960). In this work Cordovero laid the foundations for kabbalistic ethical literature, which proliferated in the 16th–18th centuries. In its short chapters he instructed every Jew in the right way to follow in order to come close and identify spiritually with each of the ten Sefirot. This short treatise influenced many later kabbalistic moralists in Safed and Eastern Europe. There are two existing abridgments of Pardes Rimmonim: Pelah ha-Rimmon (Venice, 1600) by R. Menahem Azariah of Fano, and Asis Rimmonim (Venice, 1601) by R. Samuel Gallico.