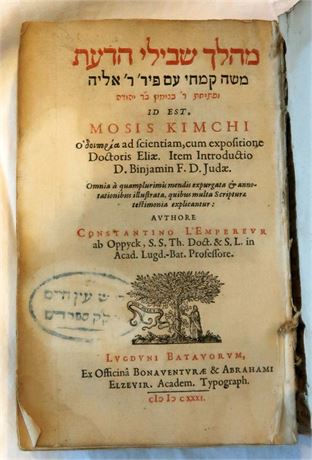 Grammatical work by R. Moses ben Joseph Kimhi (Remak, d. c. 1190). This edition is printed with an introduction by R. Benjamin Buzko (here given as Kalbi) and annotations attributed to R. [Solomon] Zalman [Ashkenazi] Posner with additions from R. Elijah Levita  Sefer Dikduk, the first printed Hebrew grammar book, is Moses best known work, entitled by him and better known as Mahalakh Shevilei ha-Da’at, from the initial letters of his name Moshe (משה = מהלך שבילי הדעת). As a grammarian, R. Moses generally followed his father, although his work shows traces of the influence of Abraham ibn Ezra, especially in terminology. He was little concerned with phonology and stressed the morphology of the verb. In Mahalakh Shevilei ha-Da’at, he introduced the use of the root pkd in paradigms and, considering nifal the passive of kal, arranged the conjugations in the order: kal, nifal, pi'el, pu'al, hifil, hofal, po'el, hitpa'el. These innovations became common in later grammars. The Mahalakh was was translated into Latin by Sebastian Muenster under the title Liber viarum linguae sacrae (Paris, 1520).

R. Moses ben Joseph Kimhi was a renowned grammarian and exegete from Narbonne, Provence. He was the son of R. Joseph Kimhi and brother of R. David Kimhi. R. Moses also wrote Sekhel Tov, a brief supplementary treatise dealing principally with the theoretical classification of nouns, particles, and verbs. A Sefer Tahboshet, apparently dealing with anomalous grammatical forms, is no longer extant. In his exegesis, Moses followed the method of literal interpretation employed by his father and Ibn Ezra. Preferring to comment on generally neglected books of the Bible, he composed commentaries on Proverbs, Ezra, and Nehemiah - which have been printed in rabbinic Bibles but ascribed to Abraham ibn Ezra - and a commentary on Job (published by I. Schwarz in Tikvat Enosh, 1868). Ta'anug Nefesh, an ethical work, has also been attributed to him. Moses Kimhi exercised considerable influence on his brother David, who referred to him as "my brother, my teacher." Through Muenster's translation, his Mahalakh became one of the most popular grammars used by the 16th-century Christian Hebraists and was reprinted many times. Eldest son of the grammarian, exegete, poet and translator, R. Joseph Kimhi (c. 1105–c. 1170) and brother of R. David Kimhi (Radak, c. 1160-c.1235). Joseph moved to Narbonne from Spain to escape the Almohad persecutions, and it was there that Moses lived and raised David, only ten at the time of their father’s death. He predeceased the Radak, who often refers to Moses, “my teacher, my brother, R. Moses, of blessed memory.”