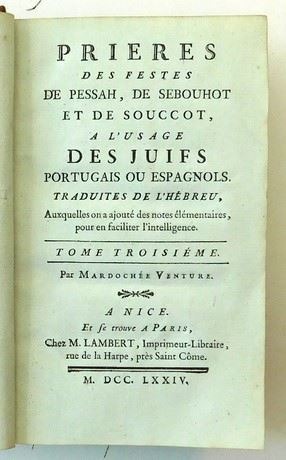 In French. Liturgies for the Three Holidays translated to French by Mardochee Venture following the customs of Spanish and Portuguese Jews.

Spanish and Portuguese Jews, also called Western Sephardim, are a distinctive sub-group of Iberian Jews who are largely descended from Jews who lived as New Christians in the Iberian Peninsula during the immediate generations following the forced expulsion of unconverted Jews from Spain in 1492 and from Portugal in 1497. Although the 1492 and 1497 expulsions of unconverted Jews from Spain and Portugal were separate events from the Spanish and Portuguese Inquisitions (which was established over a decade earlier in 1478), they were ultimately linked, as the Inquisition eventually also led to the fleeing out of Iberia of many descendants of Jewish converts to Catholicism in subsequent generations.

In the 16th and early 17th centuries, conversos were also seeking refuge beyond the Pyrenees, settling in France at Saint-Jean-de-Luz, Tarbes, Bayonne, Bordeaux, Marseille, and Montpellier. They lived apparently as Christians; were married by Catholic priests; had their children baptized, and publicly pretended to be Catholics. In secret, however, they circumcised their children, kept Shabbat and feast-days as best they could and prayed together. Henry III of France confirmed the privileges granted them by Henry II of France, and protected them against accusations. Under Louis XIII of France, the conversos of Bayonne were assigned to the suburb of Saint-Esprit. At Saint-Esprit, as well as at Peyrehorade, Bidache, Orthez, Biarritz, and Saint-Jean-de-Luz, they gradually avowed Judaism openly. In 1640 several hundred conversos, considered to be Jews, were living at Saint-Jean-de-Luz; and a synagogue existed in Saint-Esprit as early as 1660.

In pre-Revolutionary France, the Portuguese Jews were one of three tolerated Jewish communities, the other two being the Ashkenazi Jews of Alsace-Lorraine and the Jews of the former Papal enclave of Comtat Venaissin; all three groups were emancipated at the French Revolution. The third community originally had their own Provençal rite, but adopted the Spanish and Portuguese rite shortly after the French Revolution and the incorporation of Comtat Venaissin into France. Today there are still a few Spanish and Portuguese communities in Bordeaux and Bayonne, and one in Paris, but in all these communities (and still more among French Jews generally) any surviving Spanish and Portuguese Jews are greatly outnumbered by recent Sephardic migrants of North African origin.

Mardochee Venture was a French scholar; flourished at Avignon in the latter part of the eighteenth century. In collaboration with Isaiah Vidal he composed the "Seder ha-Ḳonṭres" (Avignon, 1765), a collection of liturgical chants for the use of the Jews of the county of Venaissin. This compilation includes a piyyuṭ (p. 47; comp. Zunz, "Z. G." p. 473) composed by Venture, partly in Hebrew and partly in Provençal, which was translated into French by Sabatier in his "Chansons Hébraïco-Provençales des Juifs Comtadins" (Nîmes, 1876) and by Pedro II., of Alcantara, Emperor of Brazil, in his "Poésies Hébraïco-Provençales du Rituel Israélite Comtadin" (Avignon, 1891).