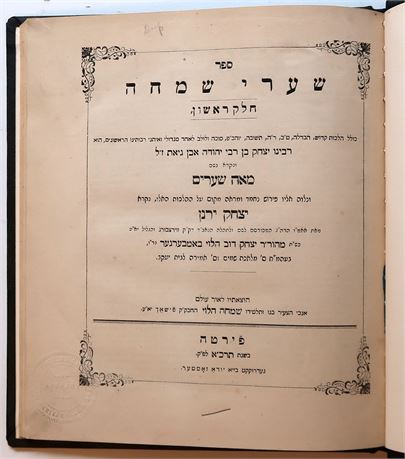 Halakhic work by an early renowned sage, R. Isaac ben Judah ibn Ghiyyat, published from the only extant manuscript and with an accompanying commentary by R. Seligman Baer Bamberger. Sha’arei Simhah is in two parts, each with its own title page. The first part has several approbations followed by R. Bamberger’s introduction and then the text, which is in two columns. Ibn Ghayyat's text is entitled Me’ah Shearim and is in the inner column in square letters. R. Bamberger’s commentary is entitled Yizhak Yerannen is in the outer column in rabbinic letters. The first part includes hilkhot Kiddush, havdalah, Tisha b’Av, Rosh Ha-Shanah, teshuvah, Yom ha-Kippurim, Sukkah, and Lulav. Part two is on Hallel, hol ha-Mo’ed, mourning, Pesahim, sephirot ha-Omer, and Megillah.

R. Isaac ben Judah ibn Ghiyyat (1038–1089), was a halakhic authority, commentator, and poet, who headed the yeshivah of Lucena in his place of residence. He was a friend of R. Samuel ha-Nagid, who regarded him highly. His many students included R. Moses ibn Ezra, R. Joseph ibn Sahal, and R. Joseph ibn Zaddik. When Joseph was murdered in 1066, his widow and young son Azariah escaped to Lucena where Ibn Ghayyat received them cordially-providing for the widow, and raising and caring for the child like a father. At the age of 51, he traveled to Cordova for treatment of a severe ailment, and died there. He was buried in Lucena. Only part of Ibn Ghayyat's work, Halakhot Kelulot, has survived. That part was by R. Seligman Baer (Simhah) Bamberger under the name Sha’arei Simhah (1861–62). Besides his halakhic work, he also wrote a commentary to the Talmud which he called Sefer ha-Ner ("Book of the Candle"; Kitab al-Seraj in Arabic) because its purpose is the illumination of difficult talmudic discussions; Maimonides quotes him in one of his responsa. Some of Ibn Ghayyat's responsa are extant. He also commented on the Bible, his commentary on Ecclesiastes being still extant (1884; republished in 1962 by Y. Kafah who incorrectly ascribes it to Saadiah Gaon). R. Jedaiah ha-Penini refers to it (Resp. Rashba, vol. 1, no. 418) as "a pleasing commentary revealing considerable wisdom." His commentaries to other volumes are often quoted in R. Solomon b. Melekh's Mikhlal Yofi. Four hundred of his poems have been preserved, most of them piyyutim. R. Seligman Baer Bamberger was a Talmudist of the old school and leader of the Orthodox party in Germany; born at Wiesenbronn, near Kitzingen, Bavaria, Nov. 6, 1807; died at Würzburg Oct. 13,1878. His strictly Orthodox parents sent him, when he was fifteen years old, to the yeshivah at Feurth, where he pursued exclusively the study of the Talmud under R. Wolf Hamburger and R. Judah Löb Halberstadt. He was an eager and able student, and at the end of five years obtained his diploma as rabbi. The idea of making a profession of the Torah did not enter Bamberger's mind; and he opened a general business store in his native town. Rabbinical studies, however, continued to be his chief employment. The following episode shows his enthusiasm for things spiritual: A customer once came into his place of business while he was deeply absorbed in his folios, and he called out impatiently: "Is there no other shop in this place, that you must come and disturb me?" - and continued his reading. When Bamberger left the synagogue early in the morning, he was wont to say: "If only no customers come to-day, so that I may not be bothered in my studies!" With such commercial principles it is no wonder that his trade decreased; and as his family grew larger, the capital with which he started, the dowry of his wife, daughter of Rabbi Seckel Wormser of Fulda, to whom he was married in 1829 dwindled away, and his business had to be liquidated. But Bamberger's reputation as a Talmudist and a zealous representative of Orthodoxy was ever on the increase; and while he was still atradesman, pupils came to him from all parts of Germany. Among them were some who later attained to prominence, especially in Orthodox circles. R. Bamberger's energies were bent on the one task of preserving and spreading Orthodox Judaism. He was no fanatic, however; and his disputes with his opponents never became personal.