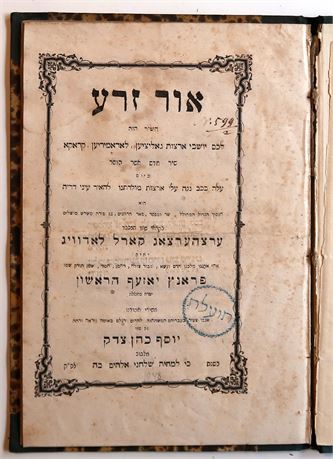 Poem in honor of Kaiser Frantz Josef's coronation by R. Joseph Kohn-Zedek (1827–1903), Hebrew poet, writer, and publicist. Kohen-Zedek, who was born in Lvov, studied rabbinics with Solomon Kluger in Brody and S. J. Nathanson in Lvov. He first engaged - unsuccessfully - in business and then turned to literature and journalism. He published a number of collections of his patriotic poetry in honor of the Austro-Hungarian emperor - from whom he received a gold medal for art and science in 1851 - and an anthology of contemporary poetry dedicated to Moses Montefiore, Neveh Kehillah (1864). Kohen-Zedek edited a number of more or less short-lived Hebrew periodicals: Meged Yerahim (4 issues, 1855–59), Ozar Hokhmah (3 issues, 1859–65), Ha-Yehudi ha-Nizhi (4 issues, 1866), and Or Torah (4 issues, 1874). His weekly Ha-Mevasser, which included a literary supplement, Ha-Nesher, was the first Hebrew paper in Galicia (1861–66); some of the best Hebrew writers and scholars contributed to it. He himself wrote in a lively and original melizah style. Following a dispute with one of his associates which led to a denunciation, Kohen-Zedek had to leave Austria in 1868. He went first to Frankfort on the Main, and in 1875 to London, where he served as preacher to immigrant congregations. In London he wrote a number of mainly homiletic works, including Elef Alfin, a thousand-word eulogy on Chief Rabbi Nathan Adler, each word beginning with alef. Of some scholarly importance are his Sefat Emet (1879), a polemic against Michael Rodkinson; Divrei ha-Yamim le-Malkhei Zarefat (1859), an edition of Joseph ha-Kohen's chronicle with Kohen-Zedek's introduction; and Even Bohan (1865), an annotated edition of Kalonymus b. Kalonymus' satirical work. His Biographical Sketches of Eminent Jewish Families (1897) is in English. Kohen-Zedek maintained a lively correspondence with the leading rabbis and scholars of his time. He has been called "the last publicist of the Galician Haskalah."