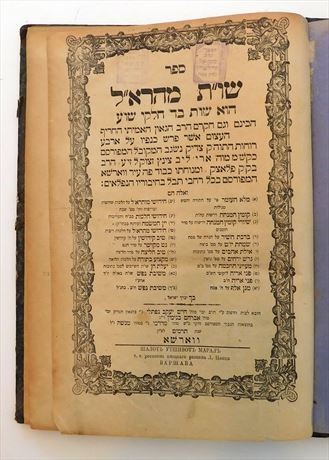 First edition of responsa by R. Aryeh Leib ben Moses Zuenz (Zuedlz, 1773–1883), Polish rabbi and author. Zuenz was a descendant of Leib Zuenz (17th century) who served as rabbi of Holleschau and Pinczow, where Aryeh Leib was born. His great perspicacity was recognized when he was young, and he became known as Leib Ḥarif ("sharp-witted"). He lived in Prague and in Bratislava, and was appointed rabbi of Plotsk. He later went to Praga, a suburb of Warsaw, where he served as rabbi for two years. However, he relinquished this position when he was appointed the head of a yeshivah in the town. A prolific writer, 21 of his books were published and frequently reprinted. After he directed that the inscription on his tombstone should state that he would intercede in Heaven on behalf of anyone who published his books, many Jews came forward to publish them. His works were highly valued in Poland because of their extreme subtlety and pilpulistic method. Most of his books are on the Talmud and on the Shulḥan Arukh; most important are Ayyelet Ahavim (2 pts., 1888–1891) on Ketubbot; Get Mekushar (Warsaw, 1812) which discusses the ordering of get and ḥaliẓah and has a commentary, Tiv Gittin; Simḥat Yom Tov (1841) on Beẓah; Gur Aryeh (1943) on Ḥullin; and Geresh Yeraḥim (1870) on Gittin. He also wrote original interpretations of the Pentateuch, responsa, and sermons.