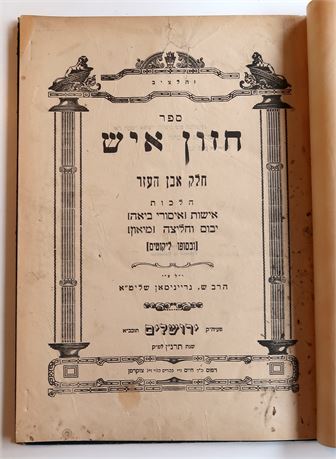 R. Avraham Yeshayahu Karelitz (1878–1953), known from his work as the "Hazon Ish." R. Karelitz received his education from his father, head of the bet din at Kossow; from an early age he manifested unusual talent and diligence. He devoted his life to the study of the Torah, although also learning such sciences as astronomy, anatomy, mathematics, and botany, since he felt that a knowledge of them was necessary for a full understanding of various aspects of Jewish law and practice. After his marriage he continued to lead an extremely modest life, his wife providing for their needs while he spent day and night in study. His first work, on Orah Hayyim and other parts of the Shulhan Arukh, was published anonymously in Vilna in 1911 under the title Hazon Ish, the name by which R. Karelitz became almost exclusively known. It created a deep impression in the rabbinic world because of its vast knowledge and extreme profundity. When he moved to Vilna about 1920, he came to the notice of R. Hayyim Ozer Grodzinski who, henceforth, used to consult him in all religious and communal matters. His reputation for saintliness and knowledge was widespread and people from all walks of life would frequent his home, for scholarly discussions or to seek advice on religious, business or personal problems, or simply to receive his blessing. When in 1933 he settled in Erez Israel, his house in Bene-Berak became the address for thousands who sought his guidance. R. Karelitz was an example of a personality, holding no official position, who nevertheless became a recognized worldwide authority on all matters relating to Jewish law and life. He did not head any yeshivah, yet he was teacher and guide to thousands of students. He was not a communal leader, yet he exerted an enormous influence on the life and institutions of religious Jewry. He did not publish many responsa, but became the supreme authority on halakhah. On one occasion, he was consulted by David Ben-Gurion, the prime minister of Israel, on the question of conscription of girls. He was neither a Hasid nor an extremist, but was intimate with both these groups. He considered man's duty in life to be the constant and meticulous study of Jewish law aiming at the attainment of a maximum degree of perfection in religious observance. Although essentially an academic scholar, he applied himself to practical problems, devoting much effort to the strengthening of religious life and institutions. His rulings on the use of the milking machine on Sabbath (to overcome the prohibition of milking in the usual way) and on cultivation by hydroponics during the sabbatical year (when he challenged the validity of the permission to cultivate the land given by the chief rabbinate) are two illustrations of his practical approach. He wrote over 40 books which are models of lucidity and are written in a simple style.