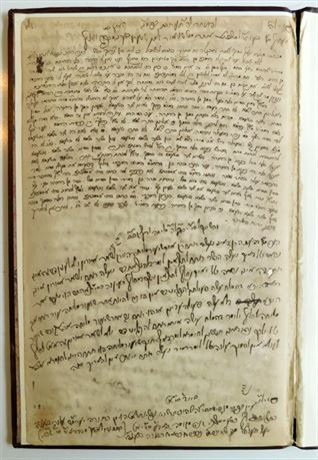 Three complete esponsa by R. Solomon ben Judah Kluger, one of the foremost rabbinic sages of the nineteenth century. R. Solomon ben Judah Kluger (1785–1869) was a talmudist and halakhist. Kluger became known as the Maggid of Brody and as MaHaRSHaK (Morenu ha-Rav Shelomo Kluger). He received his early education from his father, the rabbi of Komarov, who died during Solomon's boyhood. At 13 he went to Zamosc where he studied under Mordecai Reuben and R. Jacob Kranz , the famous maggid of Dubno. He soon became known as an illui ("prodigy"). For a time he lived in Rava where he became a shopkeeper, but failed. He was then prevailed upon to accept the post of rabbi at Kolki; from there he went to Josefov and in 1820 to Brody, where he remained for about 50 years. R. Kluger had a great reputation which still endures. A prolific writer, he wrote hundreds of responsa. He is said to have written 375 books, the numerical equivalent of his name Solomon; the list of his known works comprises no less then 174, of which 15 were published during his life and 15 posthumously. Kluger was an extremist in his orthodoxy, vehemently opposing the maskilim, whose influence was already making itself felt in Brody, and fighting against every endeavor to change the least important of religious customs prevalent in Eastern Europe. He led the opposition to the use of machine-baked unleavened bread for Passover, but in this he was motivated mainly by social considerations, claiming that it would rob many poor people of a much needed source of income on Passover. He was succeeded in Brody by his son, Abraham Benjamin.