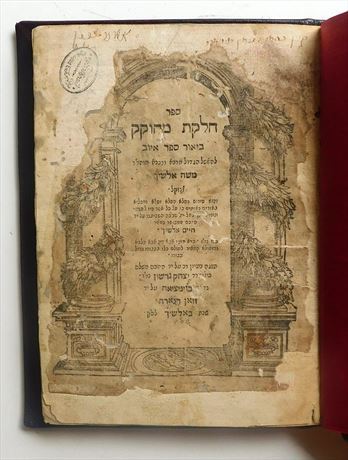 Homiletic and kabbalistic commentary to Job by R. Moses b. Hayyim Alshekh (c. 1520-1593), rabbi and Bible commentator, born in Adrianople or Damascus. He studied in Salonika under R. Joseph Taitazak and R. Joseph Caro, and then emigrated to Erez Israel, settling in Safed, where he gained prominence as an halakhic authority, a teacher in two talmudic academies, and a preacher. He was active in communal affairs and was a member of the rabbinical court of R. Joseph Caro, who conferred upon him the full ordination which had been reintroduced by R. Jacob Berab. The Alshekh in turn ordained in 1590 R. Hayyim Vital, who was his disciple in halakhah. His major field of interest was halakhah but, acceding to requests to preach on Sabbaths, in the course of preparing his sermons he occupied himself also with Bible exegesis. He also engaged in the study of the Kabbalah, from which he derived the fundamentals of his religious philosophy. According to one tradition, R. Isaac Luria sought to dissuade him from pursuing kabbalistic studies. About 1590 The Alshekh visited the Jewish communities of Syria and Turkey, and perhaps also of Persia, in the interests of Safed Jewry. He also sent an appeal on behalf of the Safed community to Italy and other countries. The last information about him was from Damascus. He participated there in a rabbinical court session in the spring of 1593. He passed on soon after at a venerable age.

The Alshekh reworked his sermons into commentaries to most of the books of the Bible. Several of these commentaries appeared during his lifetime: Havazzelet ha-Sharon (Constantinople, 1563; Venice, 159 1) on Daniel; Shoshannat ha-Amakim (Venice, 1591) on the Song of Songs; Rav Peninim (ibid., 1592) on Proverbs; and Torat Moshe (Constantinople, c. 1593) on Genesis. About 1597–98 there appeared in Constantinople his commentary on the first Book of Psalms under the title of Tappuhei Zahav. This edition was criticized by the Alshekh's son R. Hayyim in the introduction to his own edition of his father's commentary on the Psalms. R. Hayyim Alshekh averted that the manuscript of Tappuhei Zahav had been stolen from him and represented a first draft only of his father's commentary. Between 1600 and 1607, R. Hayyim Alshekh reissued in Venice some of the commentaries published by his father and printed those which had remained in manuscript. They were: Torat Moshe on the whole of the Pentateuch, Einei Moshe on Ruth, Devarim Nehumim on Lamentations, Devarim Tovim on Ecclesiastes, Masat Moshe on Esther (all 1601); Helkat Mehokkek on Job (1603) and Marot ha-Zove'ot on the early and Later Prophets, with the exception of Ezekiel (1603–07); and Romemot El on the Psalms (1605).

The Alshekh's commentaries, which are permeated with religious - ethical and religious - philosophical ideas supported by ample quotations from talmudic and midrashic sources, became very popular and have often been reprinted. Some of the commentaries appeared also in abbreviated versions. Hayyim Alshekh also published his father's responsa (Venice, 1605). Alshekh was the author of a dirge on the "exile of the Shekhinah," which became part of Tikkun Hazot. Never published and subsequently lost were She'arim, a book of a religious-philosophical nature; a commentary on Genesis Rabbah; and a talmudical work. The commentaries on Avot and on the Passover Haggadah printed under the name of Alshekh, are not original works but compilations from his commentaries on the Bible.