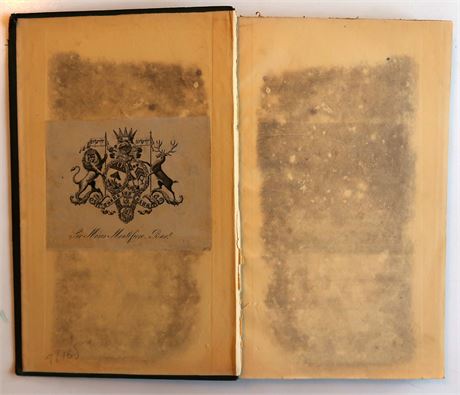 A series of conversations at Jerusalem between a patriarch of the Greek Church and a chief rabbi of the Jews, concerning the malicious charge against the Jews of using Christian blood. Translated from the Hebrew (1837) by Dr. L. Loewe, secretary to Sir Moses Montefiore, who also accompanied Sir Moses to Damascus on his mission of mercy.

The Damascus Affair, a notorious blood libel in 1840 in which Christian anti-Semitism and popular Muslim anti-Jewish feelings came to a head and were aggravated by the political struggle of the European powers for influence in the Middle East. On February 5, 1840, the Capuchin friar Thomas, an Italian who had long resided in Damascus, disappeared together with his Muslim servant Ibrahim Amara. The monk had been involved in shady business, and the two men were probably murdered by tradesmen with whom Thomas had quarreled. Nonetheless, the Capuchins immediately circulated the news that the Jews had murdered both men in order to use their blood for the Passover. As Catholics in Syria were officially under French protection, the investigation should have been conducted, according to local law, by the French consul. But the latter, Ratti-Menton, allied himself with the accusers, and supervised the investigation jointly with the governor-general Sherif Padia; it was conducted in the most barbarous fashion. A barber, Solomon Negrin, was arbitrarily arrested and tortured until a "confession" was extorted from him, according to which the monk had been killed in the house of David Harari by seven Jews. The men whom he named were subsequently arrested; two of them died under torture, one of them converted to Islam in order to be spared, and the others were made to "confess." A Muslim servant in the service of David Harari related under duress that Ibrahim Amara was killed in the house of Meir Farhi, in the presence of the latter and other Jewish notables. Most of those mentioned were arrested, but one of them, Isaac Levi Picciotto, was an Austrian citizen and thus under the protection of the Austrian consul; this eventually led to the intervention of Austria, England, and the United States in the affair. When some bones were found in a sewer in the Jewish quarter, the accusers proclaimed that they were those of Thomas, and buried them accordingly. An inscription on the tombstone stated that it was the grave of a saint tortured by the Jews. Then more bones were found, alleged to be those of Ibrahim Amara. But a well-known physician in Damascus, Dr. Lograso, refused to certify that they were human bones, and requested that they be sent to a European university for examination. This, however, met with the opposition of the French consul. The authorities then announced that on the strength of the confessions of the accused and the remains found of the victims, the guilt of the Jews in the double murder was proved beyond doubt. They also seized 63 Jewish children so as to extort the hiding place of the victims' blood from their mothers.

Isaac Baer Levinsohn is one of the founders of the Haskalah in Russia. A child prodigy, he began heder at the age of three and composed a Kabalistic work at the age of nine. At ten, Levinsohn was versed in Talmudic lore, and knew the Hebrew Bible by heart. He mastered the Russian language, an unusual achievement for a Russian Jew of that time. From 1813 to 1820 Levinsohn lived in Eastern Galicia, where he was befriended by such leaders of the Haskalah as Nahman Krochmal, Isaac Erter, Joseph Perl, and S. J. Rapoport. From 1820–23 he spread the ideas of the Haskalah as a private tutor in wealthy homes in Berdichev and other towns. He attempted to persuade the Russian authorities to mitigate the persecution of the Jews and to introduce reforms in the spirit of the Haskalah, including a plan for agricultural settlement of Jews. It was on his advice that the Russian authorities limited the number of Hebrew printing presses to three: Warsaw and Vilna in 1836, and Zhitomir in 1846 and imposed censorship on imported Hebrew books. In 1856, the Russian government decided to support him by buying 2,000 copies of his book Beit Yehudah and distributing them to synagogues and Jewish schools. Levinsohn’s literary work was mainly polemical and propagandistic. He published a the first Hebrew grammar for Russians in 1817. Levinsohn wrote satires against Hasidim and their zaddikim. His most influential work is Te’udah be-Yisrael, which is severely critical of traditional Hadarim which he calls “Hadrei mavet” (rooms of death) and opposes their talmudic-centered curriculum, as well as the use of Yiddish, favoring instead its replacement by “pure” German or Russian. In his second major work, Beit Yehudah (Vilna, 1838) Levinsohn, who follows Moses Mendelssohn’s Jerusalem, purports to reply to 35 questions asked by “the great Christian nobleman Emanuel Lipen” (the name is a scramble of the Hebrew letters Peloni Almoni, concerning the nature of the Commandments, the Talmud, the Karaites, the Pharisees, the Zohar, Shabbateanism, Hasidism, and poses the question: “Is there still hope to reform the House of Israel and how?” His contemporaries called him the Russian Mendelssohn.