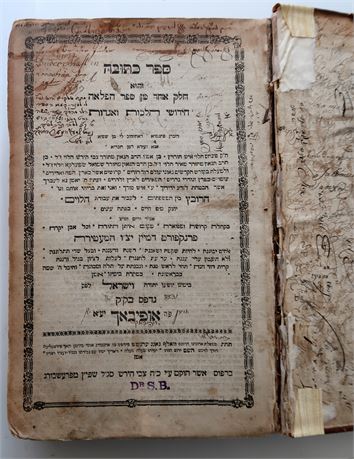 Signatures of Rabbi Shimon Weiner, Av Beit Din of Lashbrin, and his grandson, Rabbi Shlomo Zalman Breuer, Av Beit Din of Frankfurt. Signature on title page: "A gift from G-d ... Shimon Weiner [Lashbrin]". At the bottom of the title page is a stamp: Dr S. B. - belonging to Rabbi Shlomo Zalman Breuer Av Beit Din of Frankfurt am Main. Rabbi Shimon Weiner (1769-1871), a prominent disciple of the Chatam Sofer and Rabbi Mordechai Bennet. Served as Rabbi of Zalaszentgrot and afterward of Lovasbereny [see the book "HaChatam Sofer V'Talmidav" pp. 453-454 and attached material]. His grandson, his daughter's son, was Rabbi Shlomo Zalman Dr. Breuer (1850-1926) disciple of the Ktav Sofer (see "HaChatam Sofer V'Talmidav" pp. 540-541), son-in-law of Rabbi Samson Raphael Hirsch and as of 1890, his successor in the Frankfurt am Main Rabbinate. Author of Divrei Shlomo.

Expositions and novellae on Tractate Ketubot by R. Phinehas b. Zvi Hirsch Ha’Levi Horowitz (1730–1805), was born in Czortkow, Poland, where his father was rabbi. He studied first under his father and then under his two brothers, R. Nahum (introduction to the Shevet Ahim) and R. Samuel Shmelke Horowitz, later rabbi of Nikolsburg. During that period the two brothers were attracted to the circle of R. Dov Baer of Mezhirech and paid him visits, first in Mezhirech and then in Rovno. As a result of these visits he made the acquaintance of R. Shneur Zalman of Lyady, the founder of Habad.