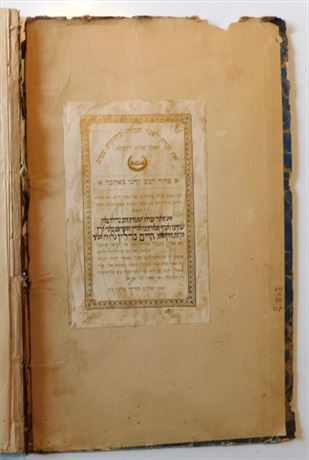 Only edition. [3], 44, 47-106 ff., folio, 382:230 mm., wide margins, usual age staining. A very good copy loose in contemporary boards, rubbed and split.
The copy of, with dedication to, R. Chaim Berlin (1832–1912), on inside front panel. The eldest son of R. Naphtali Ẓevi Judah Berlin, head of the yeshivah at Volozhin for some 40 years. At the age of 17 he married into the wealthy Zeitlin family of Shklov and later used part of his wealth to amass an excellent library which was acquired by the Yeshivat Eẓ Ḥayyim of Jerusalem after his death.

In 1865 Berlin became the rabbi of Moscow. In 1889 he returned to Volozhin at the request of his aged father, who wanted his son to succeed him as head of the yeshivah. However, he was opposed by many of the Volozhin yeshivah students, who favored the election of his niece's husband, R. Ḥayyim Soloveichik, who was renowned for his unique analytical approach to talmudic study. The controversy soon ended with the forced closing of the school by the Russian government on January 22, 1892. With the closing of the yeshivah, Berlin became the rabbi of Yelizavetgrad (Kirovograd), where he remained until 1906, when he settled in Jerusalem. His erudition, family heritage, and patriarchal appearance gained for him a leading role on the Jerusalem scene, and in 1909 he was elected to succeed R. Samuel Salant as chief rabbi of the Ashkenazi community of Jerusalem. (EJ)

Kabbalistic discourses and glosses on the on the Ez Hayyim of R. Hayyim Vital and others, such as R. Shalom Sharabi, by R. Shalom Mizrahi ben Sa’adiah Adani. The title page begins, “The counsel of the Lord is with those who fear him” (Psalms 25:14). R. Adani writes humbly about his undertaking. The initial letters of each paragraph spelling Sa’adiah Simhah. The title page is dated, “בונה ירושלם The Lord builds up Jerusalem   (659 = 1899)” (Psalms 147:2). There is a lengthy introduction from the author concluding with a vignette of Jews at prayer at the Western Wall. There are approbations from rabbis from Tunis and from Jerusalem, the former from R. Abraham Hagag, R. Elijah Borgil, R. Hayyim Borgil, R. Abraham  Abukara, R. Mordecai Samaga, R. Shalom Lisha, R. Moses Samama, R. Abraham Lombroso, and R. Abraham Fizi; the latter from R. Moses Pardo and R. Raphael Meir Panzil. The text is set in two columns in rabbinic type excpting headers and initial words. In preparing Shelom Yerushalayim, a kabbalistic work, R. Adanai made use of a wealth of sources, among them the Babylonian and Jerusalem Talmud, the halakhic authorities, and the responsa literature. <p>R. Shalom Mizrahi ben Sa’adiah Adani (second half of 19th century) was a kabbalist and scholar. The appellation Mizrahi was given to Adani because of his eastern Yemenite origin. In manhood he emigrated to Jerusalem where he joined the kabbalistic circle of the bet ha-midrash Bet El. He wrote, in addition to Shelom Yerushalayim, Sukkat Shalom (“Tabernacle of Peace," 1891), novellae on the tractate Bava Kamma, the introduction to which contains a description of his adventures on his way to Erez Israel; <p>R. Hayyim ben Joseph Vital (1542–1620) was born in Safed and studied in yeshivot there, especially under R. Moses Alshekh, his teacher in exoteric subjects. In 1564 he began to study Kabbalah, at first according to the system R. Moses Cordovero, and, after R. Isaac Luria’s (Ari) arrival in Safed, under the latter, becoming the Ari’s principal disciple. After the Ari’s death, R. Vital began to arrange the Ari’s teachings in written form, elaborating on them according to his own understanding, becoming the primary transmitter of the Ari’s teachings. R. Vital later moved to Jerusalem, serving as rabbi and head of a yeshivah from late 1577 to late 1585, where he wrote the last version of his presentation of the Lurianic system. In 1586 he returned to Safed, remaining there until 1592. In 1590 R. Vital was “ordained” as rabbi by his teacher R. Moses Alshekh, and then returned to Jerusalem in 1593 remaining several years, occasionally returning to Safed. His last move was to Damascus where he died. R. Vital was a prolific writer, his works encompassing Talmud, response, homilies, and even astronomy. R. Vital assembled his major writings into two vast works Ez ha-Hayyim and Ez ha-Da’at. The former is the inclusive name for all those writings in which he elaborated on the teaching of R. Isaac Luria. These works went through several versions and adaptations, for R. Vital began to arrange what he had heard from R. Luria immediately after his death, remained absorbed in this task for more than 20 years.