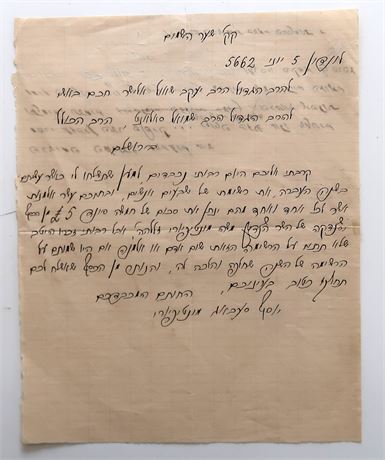 Letter seeking to disburse charitable funds remaining from Sir Moses' estate to R. Samuel Salant and R. Jacob Elyasher by Joseph Sebag-Montefiore (1822–1903), a stockbroker who amassed a fortune, was the closest associate of Sir Moses Montefiore in his last years and heir to his Ramsgate estate. In 1885 he added the name of Montefiore to his own by royal license, the family name henceforward being Sebag-Montefiore. He was a justice of the peace, high sheriff of Kent in 1889, and was knighted in 1896. Joseph, who had accompanied Sir Moses to Ereẓ Israel in 1866, remained concerned with the welfare of the Jews there, administering on behalf of the Spanish and Portuguese synagogue the Holy Land Trust bequeathed by Sir Moses. In the 1890s he was a vice president of the Ḥovevei Zion. He was president of the Board of Deputies from 1895 until his death.