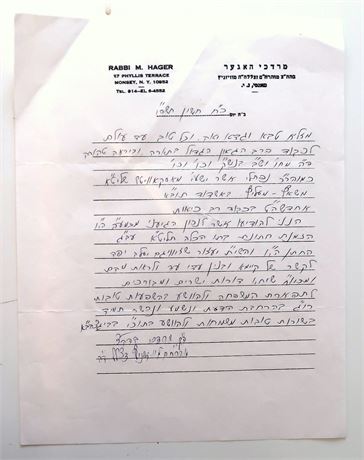 A letter signed by the Admor with several words. R. Mordechai Hager was the Vizhnitzer Rebbe in Monsey (1922-2018) was the Admor of Vizhnitz Hasidic sect in Monsey for 46 years, and had a following of tens of thousands of hasidim. . He is known for his devotion to learning Torah. He studies 18 hours a day and asks his Hasidim to study at least two hours every day. R. Mordechai has thousands of followers internationally.

He was born in Grossverdein to Rabbi Chaim Meir Hager (1888—1972), later the Vizhnitz Rebbe, and Margalia, the daughter of Rabbi Ze'ev Twersky, the Admor of Rachmastrivka.From his childhood, he followed his grandfather, the Admor Rabbi Yisroel Hager (Ahavat Yisrael). At the age of 18 he went to study for a short period with Rebbe Yoel of Satmar. Reb Mottele also learned in Pupa under the late Pupa Rebbe.He married Figa Malka, the daughter of Rabbi Yaakov Yosef Twersky, Zt"l (1899—1968), late Skverer Rebbe. After she died without children, he married her younger sister Sima Mirel and together they had 14 children, 8 sons and 6 daughters.

R. Hager had a world view similar to that of his grandfather, the Admor Rabbi Yisroel Hager (Ahavat Yisrael). During Seudah shlishit he used to protest against loopholes in religion. He had forbidden his followers to carry on Shabbos in Boro Park and Williamsburg, despite the Hechsher given to the local Eiruv by some of the city's rabbis. He would object to eating ice cream at the end of the meal, due to halakhic doubts and also for the purpose of celibacy of the pleasures of this world which is worthy of the servant of G-d, as he has clarified several times. He would object to being photographed, and even appealed to the editorial offices of the Haredi newspapers not to publish his pictures. In addition to keeping a very strictly kosher diet, he was personally a pescatarian ovo-lacto-vegetarian, although he never expressed the main reason for this practice, and did not encourage others to follow his example.