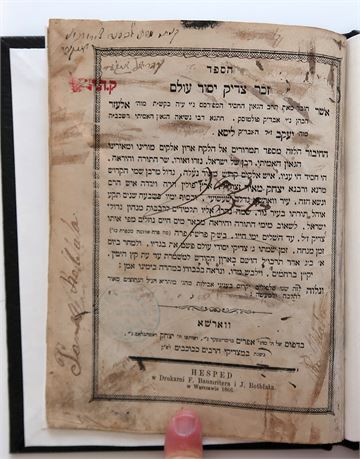 The copy of R. Ezriel b. Joseph Eiger, (1873-1943), Admor of Lublin in Warsaw, author of Takunot Rabim and other works. His signature appears on the title.

Only edition of this eulogy and two sermons on aveilot (mourning) for one of the most important Hasdic rebbes, R. Isaac Meir Alter (Hiddushei ha-Rim), by R. Eleazer ben Ze’ev Wolf ha-Kohen. He is known today as known as the Hidushei ha-Rim for his important and influetial Torah books.

Rabbi Yitzchak Meir was the founder and first rebbe of the Ger dynasty, which at one time counted over 100,000 Chasidim, and to this day remains one of the largest Chasidic groups. He was a child prodigy who was sought after by all the great Polish Chasidic leaders. The Rim’s mother Chaya Sara, was an orphan who was raised by the Koznitzer Maggid, and the Maggid played a great role in Yitzchak Meir’s early development. The Rim became a disciple of Rabbi Simcha Bunem of Pshischa and Rabbi Mendel of Kotzk. He once said that “according to Pshischa Chasidus a person does nothing with his external limbs, the main thing is the inner self, from which one is inspired to act”.

Ger emphasized the centrality of Torah and self-development, the externals of Chasidus were minimized or disdained. Though Pshischa and Kotzk were elitist, Rabbi Yitzchak Meir showed how their principles could be embraced by all Jews. From Pshischa and Kotzk Ger absorbed a healthy skepticism of human motivation and the demands of the ego. The Koznitzer admonished Rabbi Yitzchak Meir to propound chiddushim (new thoughts) every day and one notes a freshness and dynamism in the Rim as well as in other Polish rebbes. In his approbation to Rabbi Bunem’s Kol Simcha printed just 33 years after the latter’s death, Rabbi Yitzchak Meir expresses the hope that “probably even today his words will inspire the hearts”. Presumably he could only say “probably” because the new generation needed fresh inspiration. He interpreted Hillel’s “if not now when” to mean that each moment has its own fresh demands. Rabbi Yitzchak Meir was a true leader and was deeply involved in all political events affecting his flock. His halachic writings are characterized by scintillating brilliance and his non-halachic thought by great depth and warmth. The custom to make siyyumim during the nine days was seen by Rabbi Yitzchak Meir as motivated by a desire to bring Jews together in a harmonious spirit and thus rectify the sin of sinas chinam which had caused the destruction of the Temple. Rabbi Yitzchak Meir’s personal life was filled with tragedy. Many of his thirteen children died in his lifetime. When he finally consented to assume leadership after the death of the Kotzker he remarked: “I am not a rebbe. I do not want money. I do not care for honor. All I want is to spend my years bringing the children of Israel nearer to their Father in Heaven.”

R. Isaac Meir Alter came from a very distinguished family of rabbis, among the most prominent in Germany and Poland. He was a descendant of Rashi and of the Tosafist, Rabbi Meir ben Baruch of Rothenburg. In 1830 he was forced to change his name from Rothenberg to Alter because of his support towards the Poles during the November Uprising.