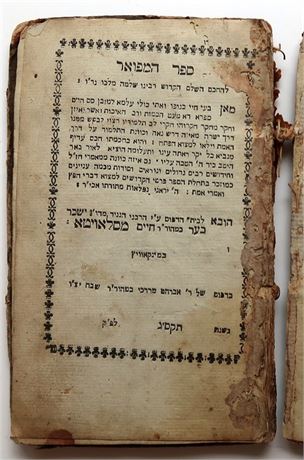 With an approbation of R. Levi Yitzchok of Berditchev, who describes R. Solomon Molcho as a pious holy person!!!

R. Solomon Molcho (c. 1500–1532), kabbalist and pseudo-messiah. Born in Lisbon of Marrano parents, he was originally called Diogo Pires. Though details on his early life are scarce, it is clear that he received a secular education, and at the age of 21 was appointed secretary to the king's council and recorder at the court of appeals. It is probable that R. Molcho secretly studied the Kabbalah. On meeting David Reuveni after the latter's arrival in Portugal in 1525, he asked to be circumcised. Reuveni dissuaded him but, undeterred, R. Molcho circumcised himself and took a Hebrew name. Reuveni suggested to R. Molcho that he flee, while he himself was forced to leave Portugal because of the suspicion that he had had a part in R. Molcho's conversion. The details of R. Molcho's flight are uncertain. Reuveni later claimed that he had sent him on a mysterious diplomatic mission to Turkey; R. Molcho himself stated that a divine command had directed his departure. His destination is also somewhat obscure. There are those who claim that he spent some time in Italy, Jerusalem, Safed, Damascus, and even Constantinople. All authorities agree, however, that he settled for a period in Salonika where he studied Kabbalah in the bet ha-midrash of R. Joseph Taitazak. There he probably met R. Joseph b. Ephraim Caro, whose writings reflect his admiration for R. Molcho. In Salonika R. Molcho gathered disciples and students who prevailed upon him to publish a collection of his sermons which are filled with expectation of coming redemption, Derashot (Salonika, 1529). In later editions the work is entitled Sefer ha-Mefo'ar. In the sack of Rome in 1527 he saw the signs of the coming redemption, and returned to Italy in 1529 and began to preach about it in Ancona. His sermons attracted many people, including Christians. The accusations of an informer that he was a Marrano who had reverted to Judaism caused him to flee to Pesaro and eventually to Rome. By then R. Molcho had become convinced that he was indeed the Messiah. In fulfillment of the talmudic legend (Sanh. 98a) that recounted the suffering of the Messiah, R. Molcho, dressed as a beggar, sat for 30 days, tasting no meat or wine, among the sick and the infirm on a bridge over the Tiber by the pope's palace.

R. Molcho succeeded in gaining the confidence of Pope Clement VII, who granted him protection (1530). His standing was further strengthened when his prophecies of a flood in Rome (1530) and an earthquake in Portugal (January 1531) came true. He preached widely and was successful in preventing the spread of the Inquisition to Portugal. He left Rome for Venice at the end of 1530 for an unsuccessful meeting with Reuveni. Attempting to mediate in a dispute between Jacob Mantino, the pope's physician, and Elijah Halfon, kabbalist and physician, R. Molcho succeeded only in arousing the enmity of Mantino. R. Molcho fled to Rome and a friendlier atmosphere, but Mantino, seeing danger in R. Molcho's activities, followed him and intrigued against him. R. Molcho was accused by an inquisitional court of judaizing and was condemned to be burned at the stake. He was saved by the personal intervention of the pope and another man was burned in his place. In 1532 R. Molcho left for northern Italy, where he again met with Reuveni. Together they went on a mission to Emperor Charles V who was then at Regensburg. Although the nature of their mission to Charles is somewhat speculative, R. Joseph (Joselmann) of Rosheim records in his memoirs that R. Molcho came in order to rouse the emperor to call upon the Jews to fight against the Turks. However, Charles brought Molcho to Mantua, where he was tried and burned at the stake in late 1532 after refusing to recant and convert to Christianity. Many Jews and Marranos in Italy, however, did not accept that R. Molcho had died, but believed that he had been saved once more.

The influence of R. Molcho was considerable both during his lifetime and after his death. R. Joseph of Orly took note of Molcho in his messianic prophecies. Already in 1531 an important messianic movement had spread under his influence and had reached Poland. Some of his belongings were saved by the Jews of Prague and displayed long after his death; his influence on Shabbateanism was not insignificant. In addition to his Sefer ha-Mefo'ar, R. Molcho left a number of letters incorporated by R. Joseph ha-Kohen in his historical writings and in Hayyat Kaneh edited by Abraham Rothenberg in 1648, and some poetry. His life and that of Reuveni were the subject of much fictional writing, such as M. Brod's Reuveni Fuerst der Juden (1925); E. Fleg's Le Juif du pape (1925), and A. A. Kabak's Shelomoh Molkho (1928–29).