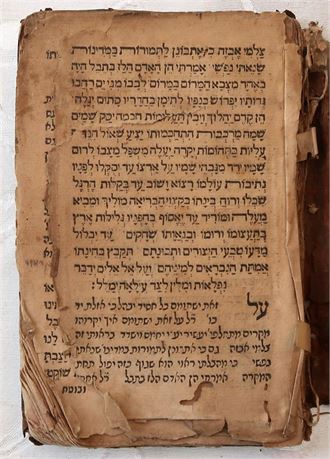 Popular poetical and philosophical work on the vanity of worldly things by R. Jedaiah ben Abraham Bedersi (ha-Penini, c. 1270–1340). This, the most famous of R. Jedaiah’s works, is also known as Shamayim la-Rom from its initial words, “The sky for height (shamayim la-rom) and the earth for depth” (Proverbs 25:3). It was written after the expulsion of the Jews from France in 1306, referred to in the book. Behinat Olam discusses the uncertainties of fortune and the correct path to be followed. Its great popularity is demonstrated by the fact that an other edition was printed elsewhere the same year. Behinat Olam is a lyrical, ethical monograph on the theme of the futility and vanity of this world, and the inestimably greater benefits of intellectual and religious pursuits. Behinat Olam, written in florid prose and rich in imagery, combines philosophic doctrine and religious fervor with a good measure of asceticism and pessimism. It has been translated into English (Behinat Olam or An Investigation of... Organization of the World, London, 1806), Latin, French, German, Polish, and Yiddish, and numerous commentaries have been written on it.

R. Jedaiah ben Abraham Bedersi (ha-Penini, c. 1270–1340) was a poet and philosopher. Possibly a native of Beziers, R. Jedaiah is known to have spent time in Perpignan and Montpellier. Little is known of his personal history. He may have been a physician. R. Jedaiah's intellectual interests were literary and philosophic, although the two spheres were not clearly separated. In his youth, he composed a poetic prayer of 1,000 words entitled Bakkashat ha-Memim, every word of which begins with the letter mem (in Olelot ha-Bohen, 1808). He is also credited with a similar composition, every word of which begins with alef, but many believe that this latter poem was written by R. Jedaiah's father. In popular style he composed Ohev Nashim. R. Jedaiah also wrote Sefer ha-Pardes (Constantinople, 1516), reflections on isolation from the world, divine worship, the behavior of judges, grammar, and astronomy. The last chapters deal with rhetoric and poetry. R. Jedaiah was the author of commentaries on various Midrashim (Paris, Bibliotheque Nationale, Ms. 738; De Rossi, 222), as well as a commentary on Pirkei Avot (Escurial, Ms. G. IV, 3). He may also have written a super-commentary on Ibn Ezra's commentary on Genesis.

R. Jedaiah also wrote a number of works which are more strictly scientific and philosophical. He was the author of explanatory notes on Avicenna's Canon (Bodleian Library, Ms. Mich. Add. 14, and Mich. 135), and on Averroes' commentary on Aristotle's Physics (Steinschneider, Uebersetzungen, 109; HB, 12 (1872) 37). A number of Jedaiah's philosophical works are found in manuscript 984 of the Hebrew manuscript collection of the BibliothIque Nationale in Paris (see S. Munk, in Archives IsraMlites (1847), 67–72): Ha-De'ot ba-Sekhel ha-Homri ("Theories Concerning the Material Intellect"), an epitome of Aristotle's De Anima; Ketav ha-Da'at ("Treatise on the Intellect"), a paraphrase of Sefer ha-Sekhel ve-ha-Muskalot, the Hebrew translation of al Farab<'s Kitab al-'Aql wa al-Ma'aqulat ("Treatise on the Intellect"); Ma'amar be-Hafkhei ha-Mahalakh ("Treatise on Opposite Motions"), in which Jedaiah criticizes the views of another scholar, whose name he never mentions, concerning Averroes' commentary on Aristotle's De Caelo Bk. 1, ch. 4; and Ketav ha-Hitazzemut ("Book of Confutation"), a refutation of the scholar's reply to Jedaiah's Ma'amar be-Hafkhei ha-Mahalakh. This same manuscript contains a treatise entitled Ma'amar ha-Dan ba-Zurot ha-Peratiyyot o Ishiyyot ("A Treatise Upon Personal or Individual Forms"), which deals with the problem of whether individuals of the same species differing in accidents also differ in their essential forms. In this latter treatise there is reference made to another essay by Jedaiah, Midbar Kedemot, which is a commentary on the 25 propositions with which Maimonides opens the second part of the Guide of the Perplexed. This treatise is no longer extant.