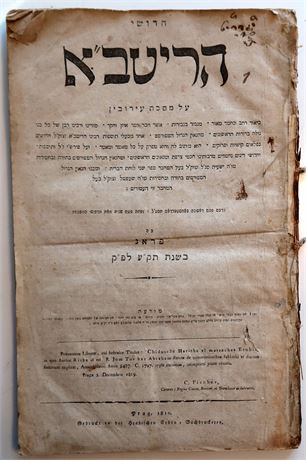 Novellae to Talmud Eiruvan by R. Yom Tov ben Abraham Ishbili (Ritba, c. 1250–1330). Ritba is considered among the great Sephardic Talmudic sages. A student of R. Aaron ha-Levi of Barcelona and R. Solomon b. Abraham Adret (Rashba), Ritba was recognized as a great scholar in his youth. Even during the lifetime of his teachers, questions were addressed to him for he was regarded as among the leading Spanish rabbis. After the death of his teachers, he was regarded by Spanish Jewry as its spiritual leader. When the community of Daroca introduced certain decrees, it was stated that this was done “in the name of R. Asher [b. Jehiel] and in that of R. Yom Tov b. al-Ishbili.” His bet din was referred to by contemporary rabbis as”the great and excellent bet din.” Although he author of other works, Ritba’s reputation rests upon his novellae to the Talmud, Hiddushei ha-Ritba, which he apparently began writing from the direct dictation of his teacher R. Aaron ha-Levi.

When writing his hiddushim Ritba he realized that the work would be inordinately long, deciding therefore, to make an abbreviated version. There is even a possibility that he wrote a third version to some tractates. As a result, his novellae to different tractates are of different types and not always of the same quality. It is sometimes difficult to identify them with certainty. His novellae are, in general, very rich in early source material: tosafistic, Spanish, Provencal, and geonic, and display a considerable originality, though he is very much under the influence of his two great teachers.