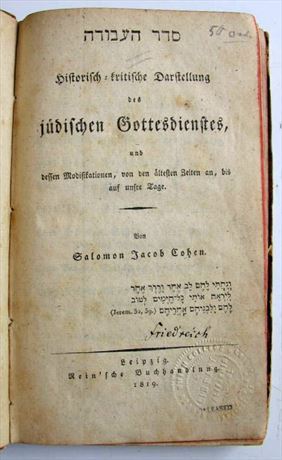 Detailed work in German on Jewish religious services from ancient times to the present Shalom ben Jacob Cohen (the ben is omitted from the title-page). The title page describes judischen Gottesdientes (Jewish services) as Historisch-kritische Darstellung des jüdischen Gottesdeienstes und dessen Modifikationen, von den älttesten Zeiten an, bis auf unsre Tage (Historical-critical representation of the Jewish religious services and its modifications, from old Testament times, up to the present). At the bottom is a verse from Jeremiah “And I will give them one heart, and one way, that they may fear me for ever, for their good, and for their children after them” (32:39). Next is a page to den edlen Israeliten (noble Jews) listing von Rothschild in Frankfurt a. M.; Israel Jacobson, David Reis, Jacob Herz Beer; Isaac Bendir Schiff; Philip Schlesinger; Salomon Heine; and Mendel  Nathanson. Next is an introduction, table of contents, a half title-page, and then the text of this detailed work on Jewish worship.

Shalom ben Jacob Cohen (1772–1845) was a Hebrew writer, poet, and editor. Born in Mezhirech, Poland, he studied German and read the new Hebrew literature, particularly Ha-Me'assef. His first book, Mishlei Agur (1799), was a collection of Hebrew fables in rhyme, with German translation, aimed at teaching Jewish children simple and clear Hebrew. Cohen went to Berlin in 1789 and taught in the Ḥinnukh Ne'arim school and in private homes. After the publication of several works he renewed the publication of Ha-Me'assef and served as its editor (1809–11). In 1813 Cohen left Germany, spent a short period in Amsterdam, and moved to London where he tried unsuccessfully to establish a Jewish school. In London, in 1815, he printed his catechism, Shorshei Emunah (with an English translation by Joshua van Oven), in which he stressed the divinity of the Written and Oral Law and its immutability. From London, Cohen moved to Hamburg (1816 or 1817), where he spent three controversy-laden years. In a posthumously published poem he attacked the hypocrisy of the "reformists" for their lack of religious belief and national feelings and considered the establishment of the Reform temple in Hamburg an act of blasphemy. However, he refrained from public intervention on this controversy. In 1820 Cohen was invited by Anton Schmid to serve as head proofreader in the Hebrew section of his printing press in Vienna where he remained for 16 years. In 1821 Cohen established the annual Bikkurei ha-Ittim , three issues of which appeared under his editorship. In 1834 he published his poetic work, Nir David, a description of the life of King David, one of the first romantic works in Hebrew literature. In 1836 Cohen returned to Hamburg, where he lived until his death. His last extensive work was Kore ha-Dorot, a history of the Jewish people (1838). His other works include: Matta'ei Kedem al Admat Ẓafon (1807), poetry; Amal ve-Tirẓah (1812), an allegorical and utopian drama, a sequel to M.Ḥ. Luzzatto's La-Yesharim Tehillah; and Ketav Yosher (1820), a literary miscellany.