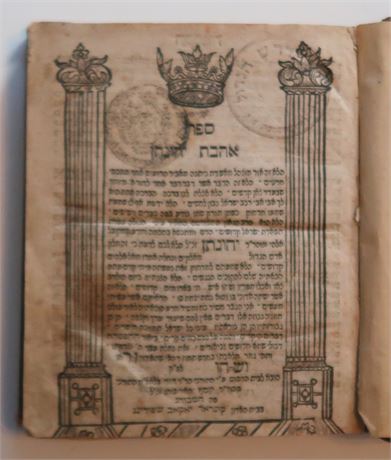 R. Jonathan Eybeschuetz b. Nathan Nata, talmudist and kabbalist commonly referred to as Reb Yonothan. A child prodigy, he studied in Poland, Moravia, and Prague, after the death of his father, he studied in Prossnitz under R. Meir Eisenstadt and R. Eliezer ha-Levi Ettinger, his uncle, and in Vienna under R. Samson Wertheimer. He married the daughter of R. Isaac Spira, the av bet din of Bunzlau. After traveling for some time he settled in Prague in 1715, and in time became head of the yeshivah and a famous preacher. The people of Prague held him in high esteem and he was considered second only to R. David Oppenheim. In 1725 he was among the Prague rabbis who excommunicated the Shabbatean sect. After the death of R. David Oppenheim (1736), he was appointed dayyan of Prague. Elected rabbi of Metz in 1741, he subsequently became rabbi of the “Three Communities,” Altona, Hamburg, and Wandsbek (1750). Both in Metz and in Altona he had many disciples.<p>His position in the Three Communities, however, was undermined when the dispute broke out concerning his suspected leanings toward Shabbateanism. This controversy accompanied Reb Yonothan throughout his life, and the quarrel had repercussions in every community from Holland to Poland. His main opponent was R. Jacob Emden, also a famous talmudist and his rival in the candidature to the rabbinate of the Three Communities. The quarrel developed into a great public dispute which divided the rabbis of the day. <p>Reb Yonothan was considered not only one of the greatest preachers of his time but also one of the giants of the Talmud, acclaimed for his acumen and particularly incisive intellect. Thirty of his works in the field of halakhah have been published. His method of teaching aroused great enthusiasm among the pilpulists, and his works, Urim ve-Tummim on Hoshen Mishpat (1775–77), Kereti u-Feleti on Yoreh De'ah (1763), and Benei Ahuvah on Maimonides (1819), were considered masterpieces of pilpulistic literature. To the present day they are regarded as classics by students of the Talmud. They are unique in that the many pilpulim they include are in most cases based on clear, logical principles that give them their permanent value. His homiletic works, Ya'arot Devash (1779–82), Tiferet Yonatan (1819), and Ahavat Yonatan (1766), also found many admirers. In succeeding generations his reputation was sustained by these works. Since (apart from Kereti u-Feleti) his works were not printed in his lifetime, it is clear that his great influence among his contemporaries must have derived from the power of his oral teaching and from his personality, both of which were highly praised by many writers. Of his books on the Kabbalah, only one was printed, Shem Olam (1891), but during his lifetime Reb Yonothan was considered a great kabbalist.