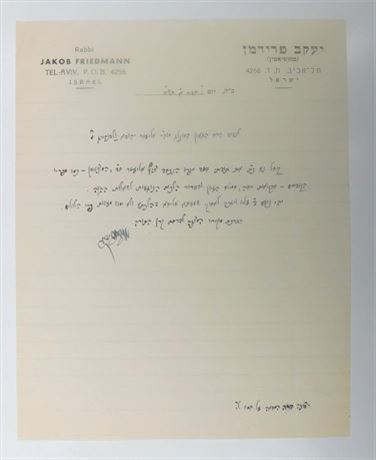 Letter by R. Jacob Friedmann, Admor of Husiatyn (1878- 1957). The youngest son of R. Yitzhak of Bohusi, he born in Bohusi. In 1895, he married his cousin, Hayyah Sarah, the daughter of R. Israel of Husyatin, where he lived for a number ­of years. At the outbreak of the First World War, after living for some time in Frankfurt, like other members of the family, he settled in Vienna.

He was a staunch supporter of the Hevrat Yishuv Eretz Yisrael and acted as chairman the Mizrachi. In 1920, he represented the Mizrahi at the Keren HaYesod conference London. In 1937, together with his father­ in law, he settled in Tel Aviv and succeeded him as rebbe in 1949. He led protest demonstrat­ions in Tel Aviv against the desecration the Sabbath. Apart from such rare demonstrations, he lived very quietly, ''because,'' said, "Hasidism does not spread by means of publicity. The leaders of Hasidism are not speech makers. So long as there are tsaddikim who maintain a high standard, there be Hasidim."

His discourses, Oholei Yaakov (Jerusalem 1962) were printed after his passing. He was buried next to his father-in-law in Tiberius.