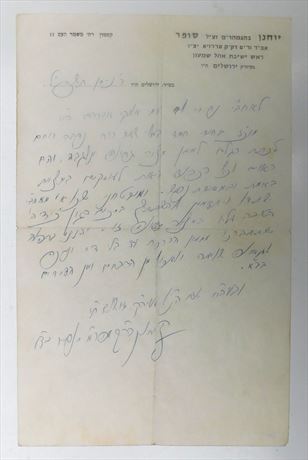 Letter by R. Yochanan b. Moses Sofer (1923-2016) is the Rebbe of the Erlau hasidic dynasty. He was born in Erlau (nowadays Eger), Hungary, where his father and grandfather served as Grand Rabbis. After surviving the Holocaust, he continued their legacy by founding a yeshiva and a movement in their name, first in Hungary and then in Jerusalem, Israel.

R. Sofer received his rabbinical education from his father. He also studied at the Yeshiva in Verpelet, Hungary, under R. Yosef Usher Pollack (1888-1944), author of Shearis Yosef Usher. In 1947, he re-established the Yeshiva in Erlau, with a small group of boys and adolescents (mostly orphans). R. Yochanan married and was appointed as Rabbi of the fledgling Orthodox Jewish community there. Due to the Communist grip on Hungary and oppression of Judaism there, R. Sofer immigrated to Israel together with his yeshiva in 1950. For a short period of time, the yeshiva merged with the Pressburg Yeshiva in Jerusalem, which was headed by R. Akiva Sofer (known as the Daas Sofer), a great-grandson of the Chasam Sofer. In 1953 he founded the Erlau yeshiva and community in the Katamon neighborhood of south-central Jerusalem. Today, the Erlau community numbers some 500 families in Israel and scores abroad. R. Sofer assumed the mantle of leadership of the community as "Rebbe" similar to his Hasidic counterparts. He is known to the Jewish population as the Erlauer Rebbe (Yiddish) or Admor of Erlau (Hebrew). He was actively involved in all aspects of the yeshiva, giving daily Torah lectures to both students and elderly members of the Erlau community and surrounding neighborhood, and prayed the daily prayers together with his pupils.

R. Yochanan was appointed to the Moetzes Gedolei HaTorah of Agudath Israel by R. Israel Alter of Gur (the Beis Yisrael) when he was only 38 years of age. At the time, the protocol was amended to allow this new member, as the original protocol allowed only rabbis above the age of 40 to join.