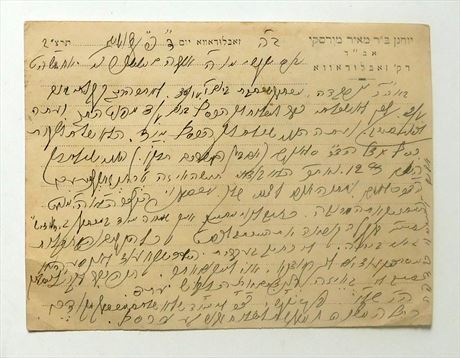 Letter by R. Yohanan b. Meir Mirski (d. 1943). the last rabbi of Zabludow, Poland. .He was born in Stovitz, next to Mir. He learned in the Mir Yeshiva, and was one of the first disciples of the K'neset Beit Yitzchak Yeshiva in Slabodka (under R' Baruch Ber). He was also a disciple of Rabbi Zalman Sender Chana Shapira in the Maltch Yeshiva. He was great in Torah, and stood at the forefront of the battle for kosher slaughtering in 1937. He perished in the Holocaust.

The first Jews settled in Zabludow as early as 1522. Jewish settlement in the town took root and began to develop toward the end of the 15th century. The wooden synagogue, built in 1646 and restored in 1765, is one of the best examples of it's type in Poland. Zabludow an important commercial center, was the venue of the meetings of the Council of Lithuania in 1664 and 1667. The Russian conquest in 1660 caused great suffering to the community. The Jewish population was 2,621 by 1897 or 68% of the total population of the town. During the 19th century weaving and tanning industries developed in the town . Due to deteriorating economic conditions many Jews immigrated to the United States and other destinations between 1905-1925. Zabludow became part of the Independent Polish republic after World War I. In 1939 the community numbered about 2,000 Jews.