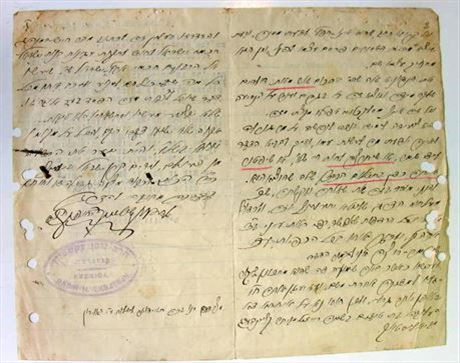 Letter by R. Nissan b. Moses Mordecai Eckstein (d. 1941), rabbi of Kuznica, Poland. An erudite scholar and rabbinic decisor he was killed by the accursed Nazis in 1941. He writes the Va'ad in Warsaw asking that they find a run-away husband who abandoned his with the dowry following their wedding, and now resides in Haifa. The letter is forwarded to the Haifa Bet Din by the Warsaw rabbinate with a typed request to follow through and signed by R. Noah Rogosinsky and R. Jacob Gesundheit, Secretary of the Va'ad.

R. Noah b. Arye Loeb Rogosinsky (d. 1943), Menahel of Yeshivot in Warsaw and served on the Bet Din for many years. He was murdered by the Nazis.

The Va'ad haRabbonim of Warsaw was founded at the end of the 19th century as the central rabbinical leadership forum of Warsaw. It's membership sported the Who's Who of Polish rabbinical leaders. The body consisted of no less than 10 rabbis at any given time culled from Hasidim and Mitnagdim. In addition to judicial cases its members represented Polish Jewry in international Jewish organizations (i.e. Agudah) and served in government when required.

Kuznica was in the Bialystok district of Poland.  Today it is in Belarus.  A small Jewish community attached to Grodno existed from 1623.  It grew to 780 residents (total 1343) by 1897, most living near the market where they had their stores, with some circulating through the neighboring villages to conduct petty trade.  In 1931, the Jewish population was 556 as many left because of economic hardship. Children studied at Yiddish and Hebrew (Horev) schools as well as the local public school. The Zionist youth movements were active.  The Germans captured Kuznica in late June, 1941, establishing a Judenrat and ghetto under a regime of forced labor.  On 2 Nov. 1942 all were sent to the Kelbasin transit camp near Grodno and from there deported to Auschwitz.

The Encyclopedia of Jewish Life Before and during the Holocaust p. 695