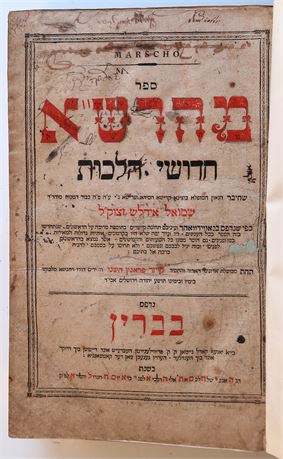 Novellae to several tractates by R. Samuel Eliezer Edels b. Judah Ha'Levi (known as MaHaRShA—Morenu Ha-Rav Shemu'el Adels; 1555–1631), one of the foremost Talmud commentators. Born in Cracow, he moved to Posen in his youth, where he married the daughter of Moses Ashkenazi Heilpern. His mother-in-law, Edel, by whose name he was later known, was a wealthy woman and supported him and his numerous disciples for a period of 20 years (1585–1605). After her death, Edels took up a rabbinic position in Chelm. In 1614 he was appointed rabbi of Lublin, and in 1625 of Ostrog, where he founded a large yeshiva. On the lintel of his house (burned down in 1889) was inscribed the verse: “The stranger did not lodge in the street; but I opened my doors to the traveler” (Job 31:32). In his Hiddushei Halakhot, one of the classical works of talmudic literature, included in almost every edition of the Talmud, he explains the talmudic text with profundity and ingenuity. In his introduction to the work he writes that “out of love for terseness” he would refrain from elaboration. He ends most of his comments with the phrases: “And weigh carefully” or “And the meaning is simple” although in reality it is far from clear and many later scholars often found difficulty in understanding his point. Often he poses a difficulty and says: “And this may be solved,” leaving it to the students to find the answer. He was fond of talmudic casuistry, and used to say: “No one can arrive at the root and depth of a talmudic problem without a master who teaches him pilpul”; but he vehemently opposed the kind of casuistry which, in his time, came to be known as hillukim, where students would engage in fruitless debate to try to demolish one another's arguments. In his Hiddushei Halakhot, Edels' explanations of talmudic problems are generally in accordance with the view of Rashi and the tosafists. His book gained such wide currency that an understanding of Edels' comments came to be regarded for many generations as one of the qualifications of the average talmudic scholar. He attempts to explain the difficult talmudic aggadot in a rational manner, sometimes taking them as parables with interpretations which are at variance with their literal meaning. He criticized, however, the prevailing tendency of preachers to distort the plain sense of biblical and talmudical passages. Although censuring “those people who in the present generation give all their time to the study of Kabbalah,” he nonetheless quotes extensively from kabbalistic literature. He also made use of his acquaintance with Jewish philosophy in his interpretation of talmudic aggadot. He adopted a positive attitude toward the secular sciences, considering them important for a fuller understanding of Torah, and their acquisition as vital for learned Jews in their disputations with non-Jews. His statements are sometimes marked by a spirit of critical enquiry. He decides, for example, that the Targum to the Pentateuch ascribed to Jonathan b. Uzziel is not by him. He senses that the tosafot to the tractate Yoma are different in style from those to other tractates. He established that some statements or passages in Rashi's commentary and in the tosafot had originated as marginal comments by students who had not understood the passage, and in the course of time these comments had come to be interpolated in the text. Edels reproved his contemporaries for making light of certain precepts, e.g., those who drink to excess at the melavveh malkah meal on Saturday night and so neglect the recitation of the Shema upon retiring, and rise too late the following morning for the statutory time for the reading of the Shema and the recital of the morning prayers. He was a sharp critic of social evils in the communities, such as the dishonesty and egotism of some rich parnasim. He reproached the rabbis of his time with overawing their communities for motives which were not purely altruistic, and was irked by the fact that “in these times, whoever possesses wealth is appointed to public office for a price and is in constant pursuit of honor.” In 1590 he participated at a session of the Council of the Four Lands which pronounced a ban on those who purchase rabbinic office. Edels was held in high esteem by the scholars of his day. Joel Sirkes in his address to the leaders of the Council of the Four Lands in Lublin, said: “You have in your midst the greatest man of the present generation . . . with whom to consult and deliberate.” On his tombstone, Edels is described as “a holy man . . . exemplary in his generation . . . whose fame traveled far and wide. His great work was a light to the eyes of the Sages of Israel.” He was also highly regarded by later generations. Jonah Landsofer enjoined his sons to pay close attention to the works of Edels, “because his writings are amazingly terse and plumb the depths of Torah's truth . . . The spirit of God spoke through him, for without divine inspiration it would have been impossible for a man to write such a book.” Edels' other works are: Zikhron Devarim, novellae of the group of scholars at Posen (published by his mother-in-law in 1598); a penitential prayer beginning with the words: “El Elohai Dalfah Einai”; and a penitential prayer written in memory of the Warsaw martyrs (1597).