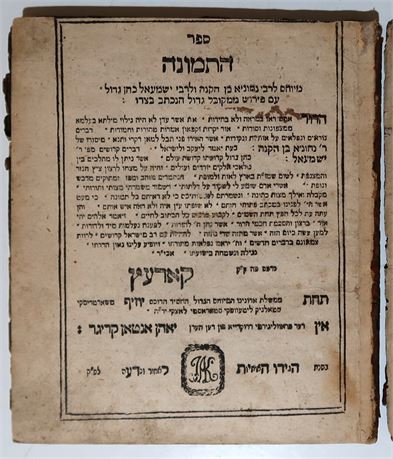 The Kabbalistic interpretation of the Al-mighty's name and cosmic shmitot. Sefer HaTemunah was probably written anonymously in the 13th or 14th century, but it is pseudepigraphly attributed to R. Nehunya ben HaKanah and R. Ishmael, tannaim of the 1st and 2nd centuries. According to Hebrew Manuscripts in the Vatican Library Catalog, the work was composed in the 1270s.

Rebbe Nehunya Ben Ha-Kanah (dates uncertain), tanna. Mishnah Ber. 4:2 relates two prayers which he would recite when entering and leaving the study hall. An aggadic statement is transmitted in his name in Avot 3:5, and two halakhot are transmitted in his name in Tosefta Ket. 3:5. One of these halakhot is brought in Tosefta 7:18, apparently responding to the words of R. Meir. Similarly his statement in Avot follows the statements of R. Simeon and Haninah b. Hakinai, which would place him in the fourth generation of tannaim, in the middle to end of the second century. On the other hand, the Babylonian Talmud asserts that Ishmael received from Neḥunya his practice of interpreting the Torah with the hermeneutical rule of kelal u-ferat ("general propositions and particulars,"  Distinct Exegetical Methods), which would place him in the second generation of tannaim. This tradition may, however, be a later expansion and elaboration of the relatively early tradition according to which R. Akiva learned the principle of ribbui u-mi'ut ("extension and limitation") from Naḥum Gamzo (Shevu. 26a). Similarly, the Talmud relates a discussion between R. Neḥunya and R. Johanan b. Zakkai but this is a relatively late aggadic traditon whose historical details are unknown. So also the Tanḥuma (Deut. to 26:13) cites a halakhic discussion between him and R. Joshua b. Ḥananiah, referring to him as R. Neḥunya b. ha-Kanah of Emmaus. He is named in the as disputing with R. Eliezer and R. Joshua (Ḥullin 129b), but in Eduyot 6:3 and 4 it is clear that the tanna originally mentioned in this tradition was R. Neḥunya b. Elinathan of Kefar ha-Bavli. The medieval Kabbalists attributed to him several mystical works. The prayer Anna be-Kho'aḥ (based upon the Divine Name of 42 letters) is also ascribed to him.

Rebbe Yishmael ben Elisha Nachmani, often known as Rabbi Yishmael and sometimes given the title "Ba'al HaBaraita", was a rabbi of the 1st and 2nd centuries (third generation of tannaim). He was a descendant of a wealthy priestly family in Upper Galilee. His year of birth was 90 CE.He was captured by the Romans as a young boy, but redeemed by R. Joshua ben Hananiah. R' Nehunya ben HaKanah became his teacher, and he remained a close colleague of Rabbi Joshua. He is likely the grandson of the high priest of the same name. He lived in Kfar Aziz, south of Hebron.

Some suppose that he was among the martyrs of Betar. The more generally received opinion, however, is that one of the martyrs was a namesake (Rabbi Ishmael's death is mentioned in Nedarim 9:10).According to tradition, his burial place is at Parod in the Galilee