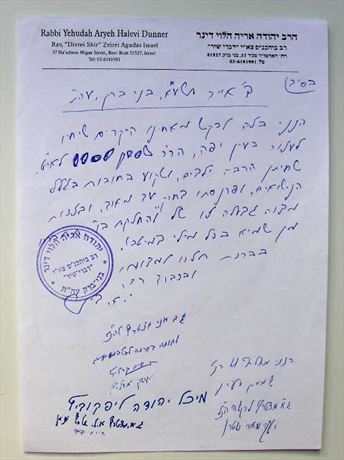 R. Shmaryahu Yosef Chaim Kanievsky, (b. January 8, 1928), is an Israeli rabbi and posek. Kanievsky is considered a leading authority in Haredi Jewish society. He was born in Pinsk to R. Yaakov Yisrael Kanievsky (also known as the Steipler) and Miriam Karelitz, sister of R. Avraham Yeshayahu Karelitz (also known as the Chazon Ish). He married Batsheva, daughter of R. Yosef Sholom Eliashiv (grandson of R. Shlomo Elyashiv, also known as the Leshem) and granddaughter of R. Ahryeh Levin. R. Chaim's wife died in 2011. He lives in Bnei Break and receives thousands of visitors every year from Jews seeking religious advice. A great deal of biographical information about Kanievsky can be found in the book "Rebbetzin Kanievsky: A Legendary Mother to All" (about his wife), published by Artscroll/Mesorah in 2012. R. Kanievsky is the official rabbi and spiritual guide for the nonprofit organization Belev Echad which was founded in Israel on 2011 and is dedicated to assist sick and disabled children and adults.

R. Kanievsky is the author of many works of Jewish law, such as Derech Emunoh ("The Path of Faith"), on agricultural laws, Derech Chochmoh ("The Path of Wisdom"), on the laws of the Jewish temple rites, and Shoneh Halachos (a systematic presentation of the popular work Mishnah Berurah). His halakhic rulings on prayer are recorded in Ishei Yisroel, and rulings pertaining to Shiluach haken are recorded in Shaleiach T'Shalach.

R. Aaron Judah Leib Shteinman, (b. 1912 or 1914) is a prominent rabbi and posek (halakhic authority) in Bnei Berak. Following the death of R. Yosef Shalom Elyashiv in 2012, he is widely regarded as the Gadol Hador, the leader of the non-Hasidic Lithuanian Jewry. He was born in Bnei Berak but returned to his family's homeland of Lithuania when he was a youth. He studied in Yeshivas Imrei Moshe in the town of Brisk, headed by R. Moshe Skolovsky, and attended shiurim (Torah lectures) given by R. Yitzchok Zev Soloveitchik, the Brisker Rav. He also studied in Kletzk under Rabbi Aharon Kotler.

R. Shteinman was the only member of his family to survive the war. While still in Switzerland, he married Tamar (Tema) Kornfeld (d. 2002), the daughter of R. Shammai Shraga Kornfeld. She had been sent to Switzerland from Poland to cure her respiratory problems and had also become a refugee when World War II broke out.

R. Michel Yehuda Lefkowitz (1913 – 2011) was a respected Haredi Lithuanian Torah leader and rosh yeshiva in Bnei Berak, Israel, for over 70 years. He was a maggid shiur at Yeshivas Tiferes Tzion from 1940 to 2011 and rosh yeshiva of Yeshivas Ponovezh L’Tzeirim from 1954 to 2009, raising thousands of students. He was a member of the Moetzes Gedolei HaTorah of Degel HaTorah, a member of Mifal HaShas, and nasi (president) of the Acheinu kiruv organization, and played a leading role in the fight for Torah-true education in yeshivas and Talmud Torahs in Israel. In addition to his own Torah works, he published the teachings of his rebbi, R. Shlomo Heiman, in the two-volume Chiddushei Shlomo.

R. Shmaryahu Yosef Nissim Karelitz (born July 1926 in Vilnius) is the chairman of the beis din tzedek (rabbinical court) of Bnei Berak. He is one of the most highly respected Orthodox rabbis in the world and one of the most important leaders of the Haredi world, together with R. Shmuel Halevi Wosner. His beis din (rabbinical court) handles all kinds of matters, such as financial disputes, marriage conflicts, and conversions. R. Karelitz is a nephew of R. Avrohom Yeshaya Karelitz, known as the Chazon Ish. (The latter's sister was R. Nissim's mother). The Chazon Ish was a previous rabbinical spiritual leader of Bnei Berak. He is also a member of the Vaad Halacha (Jewish legal council) of the Maayanei Hayeshua Hospital of Bnei Berak and the av beis din (head of the rabbinical court) of the Bnei Berak neighborhood of Ramat Aharon.

In his youth, he studied in the Ponevezh Yeshiva. He also studied with his uncles, the Chazon Ish and the Steipler. His wife is the daughter of R. Tzvi Hirsch Kopshitz of Jerusalem and the great-granddaughter of R. Yosef Chaim Sonnenfeld.