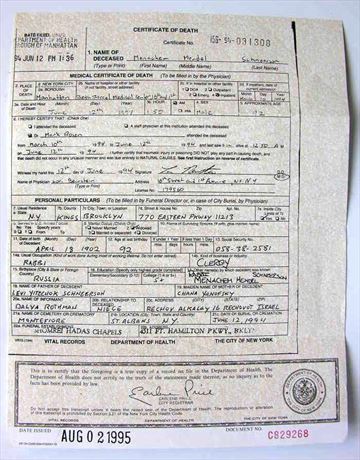 The official Death Certificate of R. Menahem Mendel Schneerson issued on August 2, 1995 by the New York City Department of Health to his next of kin. The Rebbe passed on in Beth Israel Hospital, New York, on June 12, 1994 without leaving children. His closest next of kin was his niece from Rechovot who is listed on the certificate.


R. Menahem Mendel Schneerson (1902–1994), was the son and pupil of R. Levi Isaac Schneersohn of Yekaterinoslav, and son-in-law of R. Joseph Isaac. After the death of his father-in-law in 1950 he became the seventh successive leader of Lubavich Hasidism. Under his direction, its institutions expanded, new ones were founded, and the number of adherents throughout the world increased to over 25,000. He encouraged hundreds of young men to go out to Jewish communities everywhere to establish contact with the Jewish masses and bring them back to Orthodoxy. The Lubavich Youth Organization, which he founded in 1955, has continued to play a vital role among Jewish college students. Regional offices were established around the globe, and Kefar Habad served as the Lubavicher headquarters in Israel. Under R. Schneerson's direction the influence of Lubavich spread far beyond the hasidic community and penetrated the mainstream of Jewish life in many parts of the world. R. Schneerson, while not belonging to any formal rabbinical or political organization, was frequently consulted on Jewish problems and issues, tens of thousands flocked to see him annually and receive his blessings.